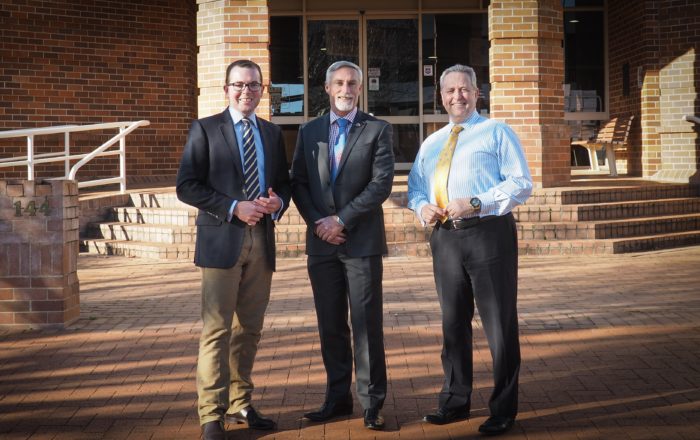 THANKS to robust management, Inverell Shire Council has become one of only 12 local councils across the state permitted to borrow from the NSW Treasury Corporation (TCorp), at substantially reduced interest rates, Northern Tablelands MP Adam Marshall announced today.

After a competitive tender process that included the major banks, Mr Marshall said council chose to borrow $2 million from TCorp to expand its sewerage treatment plant, with the edition of a third waste treatment cell.

The banks offered Council interest rates that averaged about 4.11%, but TCorp provided the funds at just 3.02%. That means that council will save around $147,000 over the 10-year life of the loan.

“Inverell Shire Council emerged as a ‘Fit for the Future’ council during the recent statewide analysis, and as a result, it is one of only a few councils that TCorp has to date supported with a major loan,” Mr Marshall said.

“TCorp’s council loan facility is a relatively new initiative by the NSW Government and I’m delighted that this hard-working, forward-thinking council has been recognised with one of the first loans.

“The $147,000 that Council saves from this agreement will readily find a place in other projects. This strategy only serves to consolidate Inverell’s ‘fitness for the future’.”

The expansion of Inverell’s sewerage treatment plant is part of council’s 10-year waste strategy, to accommodate the growing community’s needs.