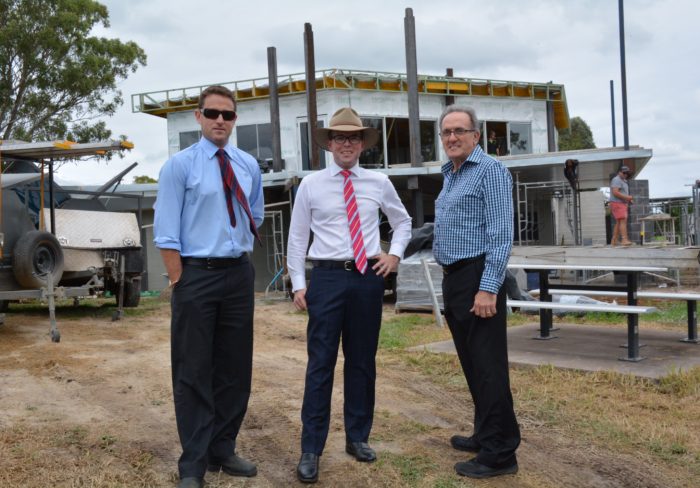 IT has been a marathon run, but the end goal is in sight for a $1.18 million upgrade to the Inverell Sports Complex that will make it one of the best in the State. The upgrades are funded through a $930,000 funding windfall from the NSW Government, coupled with a $250,000 contribution from Inverell Shire Council.

A year on from the funding announcement, construction of a new clubhouse with full disabled access is almost complete, with council aiming for a launch in April.

New security fencing and upgrades to irrigation across the sporting fields have been wrapped up. Council groundskeepers have knocked rehabilitation works out of the ballpark – teams can look forward to a perfect pitch for the upcoming winter season.

Council is now finalising designs and costing for 400 person spectator seating and improved pitch lighting. These final works are due to be completed in September, with community usage taking precedence over construction.

“Because it’s got so many facets and impacts on sporting organisations, we’re doing it in a way to minimise impact. It won’t be as quick as doing it in one hit, but we’re mindful of touch football, soccer and training for league and AFL teams,” Mr Alliston said.

Around 65 per cent of Inverell’s community use the Sports Complex, with the grounds seeing action from 11 local teams. Currently that provides for 10,000 uses per year – which will likely increase when improved lighting allows for longer hours of operation.

“When work is completed visitor numbers will get boosted – when we get lights and the ability for late night training, it will be a huge benefit for the community,” Mr Alliston said.

Member for Northern Tablelands Adam Marshall says the upgrades will make Inverell’s facilities the best in the region.

“I can’t wait to come down here on a Saturday afternoon to watch everything in action. With all these facilities within a stone’s throw of one another, it will create an incredible buzz when it hits capacity.

“Inverell’s strong sporting community have worked hard to secure upgrades across the town. In the last year, we’ve seen a $530,000 upgrade to Cameron Park, and these works will solidify the Sapphire City as a sporting hub.”