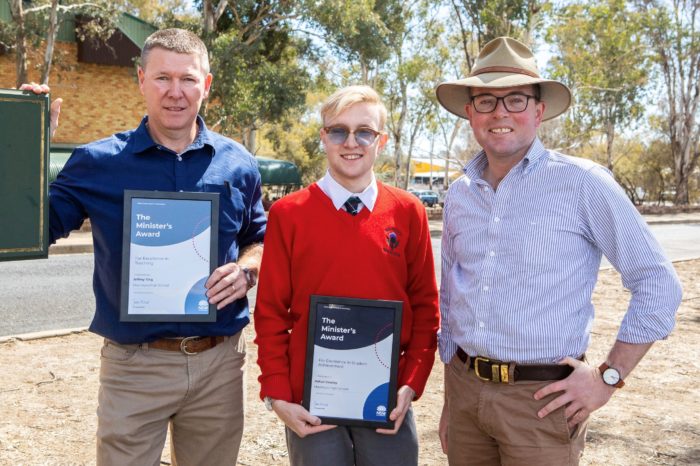 THREE Inverell high school students and a teacher have been recognised for their outstanding achievements in public education, with Northern Tablelands MP Adam Marshall today congratulating the group on being recognised at the 2019 NSW Minister’s and Secretary’s Awards for Excellence last week.

Mr Marshall congratulated each student on their dedication to study and commitment to their schools.

“At school its important students have role models to look up to and I’m pleased to say each of these three young people have proven themselves to be outstanding leaders of their peers,” Mr Marshal said.

“I’m pleased to see Inverell so strongly represented at this year’s awards with each student assessed on their academic, sport and cultural achievements.

“Both Jackson and Ruby are captains at Inverell High School and have been heavily involved with fundraising for the school and improving the wellbeing of their fellow students.

“Meanwhile Rohan has shown himself to be a strong leader for Macintyre High School’s community excelling both on the sporting field and in the classroom.

“I congratulate each student on their achievement and wish them luck with their upcoming HSC exams. All three are outstanding students in their own right but also magnificent am assorts for public education and their community.”

“Mr Ting’s great work at Macintyre High over many years has resulted in a dramatic increase in the number of students choosing to study TAS as an elective, with the faculty having the highest HSC results in the school,” Mr Marshall said.

“He is a highly valued and respect educator, held in very high regard by his peers and students.

“I think every day our teachers should be publicly recognised for everything they do in preparing our children to entire the world.”