INVERELL TENNIS ACED WITH $236,000 FOR A CLUBHOUSE WHITEWASH 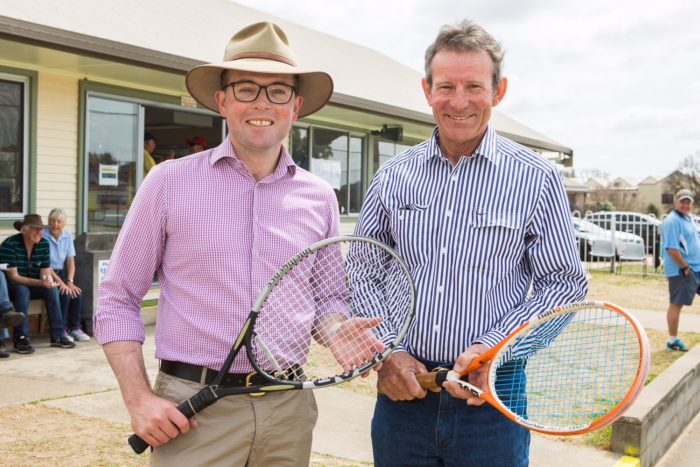 THE 60-year-old Inverell Tennis Clubhouse will get a good going over with a new game plan to upgrade facilities following an announcement today from Northern Tablelands MP Adam Marshall that the club has won a $235,964 NSW Government funding hit.

Mr Marshall presented the funding cheque to club President Charlie Osborne at the Inverell Tennis Club complex, where the club is hosting 72 students in eight teams from schools around NSW for the three-day Combined High Schools Tennis Championships.

Mr Marshall said the funding would be used to significantly upgrade the ageing clubhouse, with an external paint job, a new outside viewing pergola area, better wheelchair access, and an upgrade of the food preparation and liquor service areas, allowing for more hygienic and modern food delivery and a designated alcohol servery.

The club will also consider relocating the pros or coaches’ rooms and enlarging a committee room.

“Inverell has an absolutely stunning tennis complex; very few clubs across NSW can boast the quality of their 21-court complex, but what’s been missing is in the clubhouse, it’s nowhere up to the standard the courts offer,” Mr Marshall said.

“The present weatherboard clubhouse has been in place since 1958 and although it’s had a couple of additional areas added since then, there’s not been any major works for about 20 years so this upgrade will really hit the right spot.”

Mr Osborne said the club was thrilled with the funding and would look to formulate detailed ideas according to the grant program guidelines.

“We are very happy with the news and we’re delighted that Adam Marshall has been on our side all the way through the project planning and we appreciate his work on that,” Mr Osborne said

“It will really revitalise our entire clubhouse and allow us to put in some expanded amenities.

“We will paint it and do some basic maintenance and maybe have the foundations checked out, but we will sit down and get some agreement on that, starting with a committee meeting next week to talk about it. We will discuss it; it’s not something we want to rush into, we’ll formulate some plans and get everyone involved to consider the pros and cons.”

Mr Osborne said a new outside pergola facing the tennis courts would make a great viewing area to watch play but also a lovely spot for members to relax in after they finished their tennis.

Mr Marshall said Inverell had one of the largest tennis centres in NSW with its six synthetic and 15 clay courts but the ageing clubhouse was stifling club expansion through a lack of more modern and adequate facilities.

He said that with the endorsement of Tennis NSW, the club hosts two annual two-day Australian Rankings Tournaments, injecting almost $1 million into the Inverell economy.

“A newly upgraded clubhouse will enhance the club’s capacity to host larger events and reinforce its reputation as a pre-eminent tennis venue,” Mr Marshall said.