INVERELL’S COLLEEN NANCARROW NAMED AS OUR WOMAN OF THE YEAR 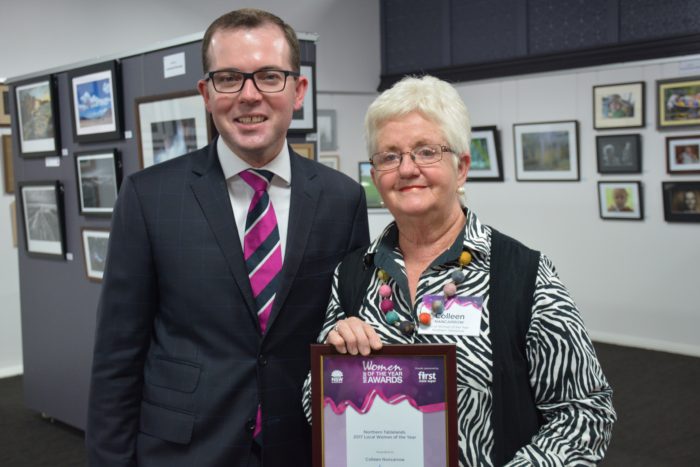 INVERELL community champion Colleen Nancarrow has officially been thanked for decades of volunteering – named Northern Tablelands 2017 Woman of the Year.

Colleen was presented with a certificate by local State MP Adam Marshall, celebrating the honour in a ceremony at Inverell Art Gallery on Friday, in front of friends, family, and fellow volunteers.

Mr Marshall praised Colleen’s achievements and said she was a deserving recipient of the award.

“Colleen has given years of service to groups like the local Red Cross branch, Inverell Art Gallery, Meals on Wheels and McLean Care,” Mr Marshall said.

“This tireless work, coupled with her humble demeanour has afforded her with a great deal of respect and appreciation from the Inverell community. If people are looking to give back to their towns – Colleen serves as a shining example of going above and beyond.”

“Colleen is regularly in touch as a strong advocate for the Inverell community, campaigning for support for services and the arts. There’s no greater way to recognise these years of work, and the victories she’s achieved, than to recognise her as 2017 Woman of the Year.”

As well as Friday’s handover, Colleen was hosted at a ceremony in Sydney for International Women’s Day last month. Mrs Nancarrow says it’s been a tremendous honour.

“It was pretty overwhelming – I was surprised because there are so many people that deserve the honour and I’m humbled I was chosen,” Mrs Nancarrow said.

“The awards were tremendous, and I was privileged to be there. It was lovely to rub shoulders with many inspiring women, and hear their stories.”

“I’ll be doing meals on wheels tomorrow, the trolley at McLean, and Red Cross work later this week. I believe if you’re within a community, if you don’t pull your weight the community suffers. I think if you benefit from a community, you need to give back.”