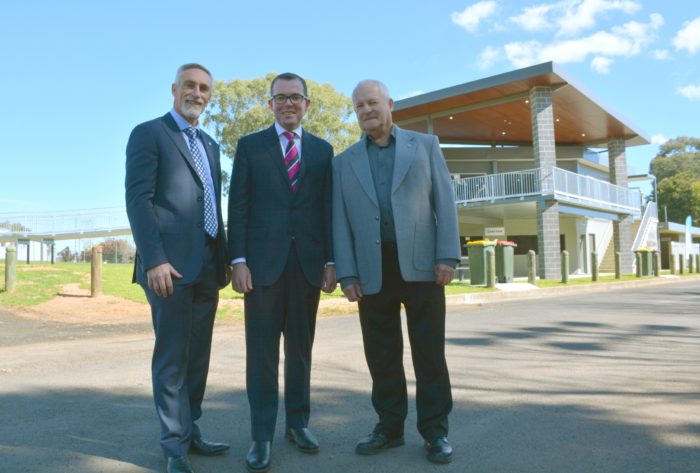 SPORTSPEOPLE from all codes and skill levels now have a new place to call home, with Inverell’s slick new sporting complex clubhouse open to the public from today.

The brand new revamped building is the crown jewel in the nearly $1.2 million redevelopment of Inverell’s sporting hub, jointly funded by NSW Government and Inverell Shire Council. The government provided $930,000 to fund the overhaul, via the ClubGRANTS program, with council providing the balance of $250,000.

Member for Northern Tablelands Adam Marshall officially opened the clubhouse today with Inverell Shire Mayor Paul Harmon and said the new facility would make sport more professional, comfortable and accessible to all in the community.

“With weatherproof viewing areas, options for hot and cold food and a capacity of 100, this building will be a huge upgrade for the nine local sports codes that call this complex home,” Mr Marshall said.

“Inverell is already widely regarded as a hub of sporting excellence – and this extensive 18-month upgrade program will assist the town in further attracting state and national events and carnivals.

“As well as driving money through the local economy, this will give local aspiring sports stars greater access to higher levels of competition, giving them a boost of encouragement to compete at their best.”

For the first time, the building is fully accessible to people with disabilities, affording them a chance to view both the upper and lower fields with vehicle access just a few metres away.

With the clubhouse completed, works will now be undertaken to complete a 400 person grandstand and provide energy efficient lighting for the pitch. The majority of work is being done in the off-season to minimise impacts on local teams.

“This building is the biggest milestone in this great complex – and the launch of the entire facility is just around the corner,” Mr Marshall said.

“When rugby, football, hockey, touch and cricket teams play their first game next season, they’ll be able to do so in the best facilities in the region.”