IS 100% FRUIT JUICE BETTER FOR YOU THAN DIET COLA? MARSHALL SAYS YES 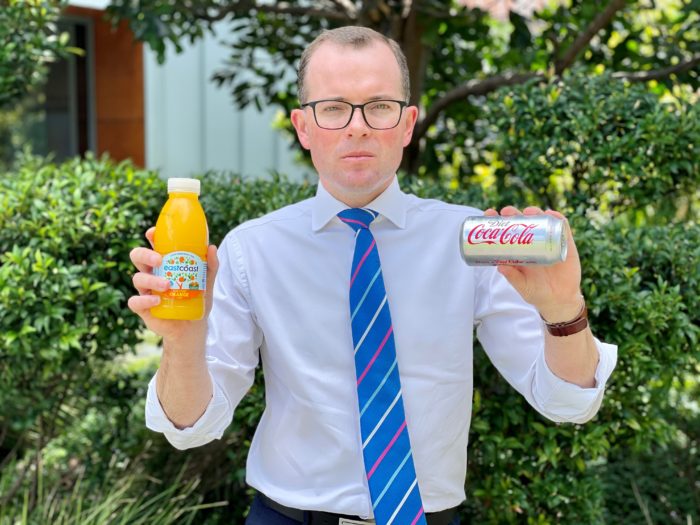 Agriculture Minister and Member for Northern Tablelands Adam Marshall today announced the State Government would seek to review and overturn a decision to downgrade the health star rating of pure fruit and vegetable juice to that of diet cola drinks.

THE State Government is taking a stand to support truth in labelling and the NSW citrus industry, with Agriculture Minister and Member for Northern Tablelands Adam Marshall today announcing the government would seek to review and overturn a decision which will see 100 per cent fruit juice given the same or worse national health star rating as diet cola soft drinks.

Mr Marshall said the ‘perverse and ridiculous’ decision was made at a meeting of the Australia New Zealand Food Forum last Friday, attended by Ministers from all Australian States, Territories and the New Zealand Government.

It will see numerous pure fruit and vegetable juices sold in Australia receive a lower health star rating than most diet soft drinks.

“This is an absolutely ridiculous decision and it simply doesn’t stack up on any assessment,” Mr Marshall said.

“By ranking pure juices lower than diet drinks it’s suggesting something that our farmers grow, nurture, then harvest and squeeze into a bottle, is somehow worse for you than a product that is put together in a factory.

“What we’re talking about is a vegetable or fruit simply squeezed into a bottle, versus something that is all bubbles and additives.

“I’ve been consistent in my message since I first took on this role as the Minister for Agriculture that the way we label our food isn’t getting the balance right.

“We have foods pretending to be primary products when they clearly are not and now we have products that are about as close to natural as you can get falling victim to the same ideology.”

Mr Marshall said the decision was also huge blow to producers, meaning that absolute pure juices, with no added sugar would not automatically receive a 4 star rating.

“Depending on the type of juice and what the blend of fruit and vegetables might be, some of them will in fact receive less stars than diet soft drinks – this is pure madness,” he said.

“NSW has always backed proposals that have come before Food Forum Ministers to have pure fruit and vegetable juices treated better than this.

Sadly, this is not the case for other States like Queensland and Victoria and who support pure juice being rated alongside diet cola.

“We strongly support the highest possible rating for pure juices, not only because it’s good for people to consume something that is high is natural vitamins and minerals, but because it’s a slap in the face for farmers to suggest otherwise.

“If the health star rating system is telling us that pure foods, which are consumed as close as possible to how they were pulled from the ground or picked from a tree are not as good for you as products which are essentially ‘made up’, then clearly something in the system is wrong and it’s not fair to either consumers or our farmers.

“This perverse anomaly must be fixed and our government will continue to fight for a just outcome.”