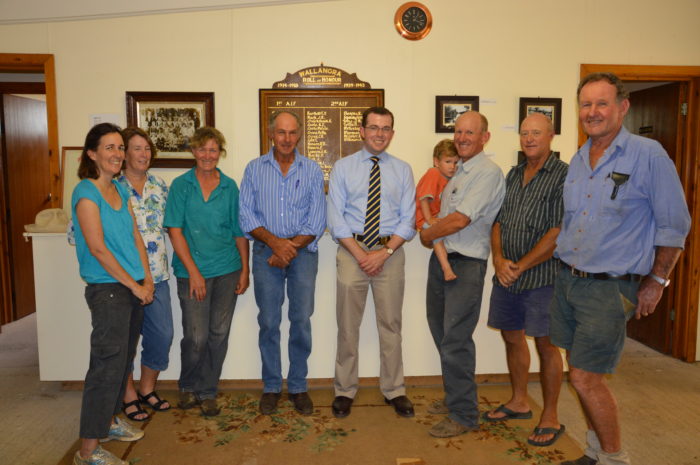 WITH preparations in full swing around the Wallangra community for its two-day Not Quite Baroque (Broke!) Festival in March, news of a NSW Government grant of $14,748 to assist with some hall upgrades came as music to locals’ ears.

Member for Northern Tablelands Adam Marshall delivered the good news to the Wallangra War Memorial Hall trustees while in the district last week.

Mr Marshall said the Public Reserve Management Fund grant was a great boost to a community that has been ‘doing it tough’ and he was delighted to have been able to assist in securing the grant.

“The committee is staging a two-day cultural festival at the end of March and that has been the catalyst for their application for funding to install a new curtain for the stage; upgrade the electricity supply to the hall and install some acoustic panelling on the walls,” he said.

“They have had a problem with their electricity for a while, so I’m very pleased they will be able to rectify this problem in time for their festival.

“I’m impressed with the enthusiasm of the committee to stage this festival and lighten the spirits of all those in the district struggling with the drought so I was only too happy to help in this small way.

“I believe it’s important that the government continues to support the efforts of small communities like Wallangra maintain and upgrade their facilities.”

“This festival project has been a great boost for our community – everyone has been so supportive and got involved in so many different ways, it’s been amazing,” Mrs McCosker said.

“We’d like to think we could run this festival each year and this funding to upgrade the hall adds to our enthusiasm.

“Social cohesion comes from a community involved in a project so this funding is crucial – we are focused on keeping our sense of community alive.

“The hall is a great community asset and we appreciate the support we’ve received from Adam and the government to make these upgrades.”