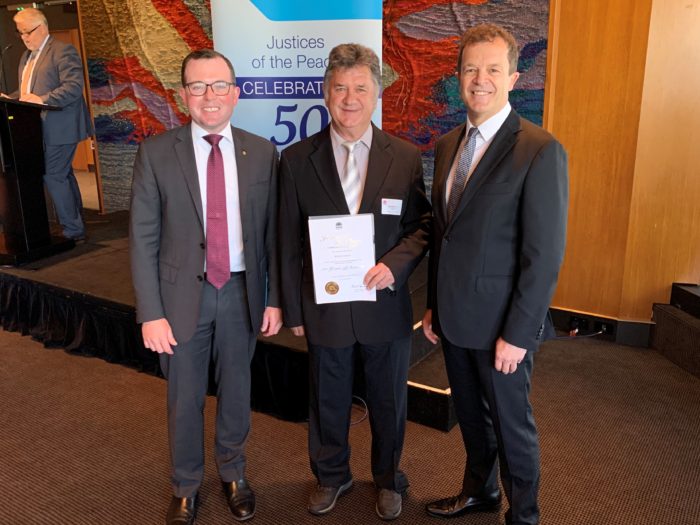 HE’S been a hard-working local musician as well as a committed community volunteer for all sorts of causes but today Pete Stanley was also honoured for helping hundreds of people over a half century to get official sign-offs for legal papers.

Today at NSW Parliament House Mr Stanley was presented with a gold embossed certificate by Attorney general Mark Speakman and Northern Tablelands MP Adam Marshall, officially recognising him for 50 years of service as a Justice of the Peace.

The local MP congratulated Mr Stanley on his decades of service.

“I’m always in awe when I meet people in the community that have been volunteering for decades longer than I’ve been alive,” Mr Marshall said.

“Pete’s tireless dedication is far more involved that being a Justice of the Peace for 50 years. He regularly volunteers at and visits residents in our region’s aged care homes, entertaining residents with his performances on his acoustic guitar and puts many of us younger generation to shame with his selflessness.

“I congratulate Pete on five decades of service, helping members of the Armidale and country communities with legal declarations and certifications.

“Few people would know where their nearest JP would be – but these hardworking men and women have an invaluable role in our legal process, ensuring documents and testimonies can be relied upon.

“Pete has been a vital part of the Armidale community and I’d encourage young people to follow his lead.”

Mr Stanley said he was honoured to receive his award today.

“I just love being in the community and trying to help people – to cheer them up or raise funds for a very worthy cause,” he said.

“I enjoy being a Justice of the Peace and assisting people when they need something witnessed or signed off. Hopefully I can keep doing it for a while longer.”

To learn more about becoming a Justice of the Peace, visit www.jp.nsw.gov.au/justices-of-the-peace/becoming-a-jp