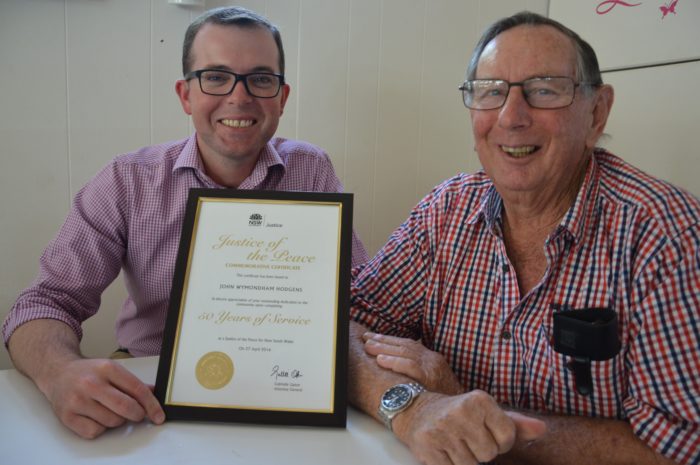 HE’S been a hard working bush bloke and agri-politician as well as a committed community volunteer for all sorts of causes but this week John Hodgens was also honoured for helping hundreds of people over a half century to get official sign-offs for legal papers.

He’s only one of three across the Northern Tablelands to be honoured recently and local MP Adam Marshall went to Inverell last Friday to bestow the honour on the retired farmer.

Mr Marshall presented Mr Hodgens with a certificate acknowledging his contribution to his community – he’s been a Justice of the Peace for over 50 years.

“I think I was about 24 when an old mentor of mine, Jack Black (a former legendary Ashford Shire President and civic leader) suggested I become a JP because there was a need; I think at the time there were only a couple around the area,” Mr Hodgens said.

Since then, he’s seen duty as the JP who gets to sign all manner of personal and professional papers for people needing that official moniker.

It’s no-names-no-pack-drill though when it comes to talking about some of the predicaments he’s witnessed in having to witness justice and legal matters for people and while he says there’s been some ‘very interesting’ situations, he’s not about to spill the beans.

“It’s been pretty plain sailing though, most people just turn up on the doorstep at home to get you to witness something for them,” Mr Hodgens said.

“But it’s different now again because where there was once only a couple of us in the immediate area, now I think there’s something like 50 or 60 around Inverell.”

Mr Marshall has applauded the track record for his justice contributions but says Mr Hodgens has also dedicated over half a century to plenty of other causes and voluntary service.

“John’s one of those local treasures we have in this region who has a finder in a few pies and who have dedicated a lot of their own personal time to making things better for the rest of us,” Mr Marshall said.

“He’s been involved in the volunteer bushfire brigade, he was very active in farmer organisations and agri-politics, he still tapes the local rugby union matches, and he’s been a long-time supporter and member for the Copeton Dam freshwater swimming activities.

“John was also involved in the preparations last year for the Kurrajong World War 1 re-enactment marches that his wife Ann Hodgens was instrumental in organising and still is a force behind the scenes for the Inverell family history group.”

His certificate records the laudatory length of service of John Wymondham Hodgens by the NSW Attorney-General Gabrielle Upton – and Mr Hodgens has admitted his second name is a long-ago family one that has some certain irony in his lifetime too.

“It’s a mouthful that Wymondham word; I think I was about 14 before I could pronounce it properly and my father told me I think that it was after Wymondham Abbey and a great great great something grandfather – but I think he was hung by the neck by a king – for trying to free serfs,” Mr Hodgens said.

As a former landowner and farmer who also went off to work as a jackaroo – because his father told him he couldn’t have people working for him if he didn’t know what the work was like for himself – and a farmer rep with various bodies and lobby groups, he thinks the historical connect is something of a fascinating family history link too.