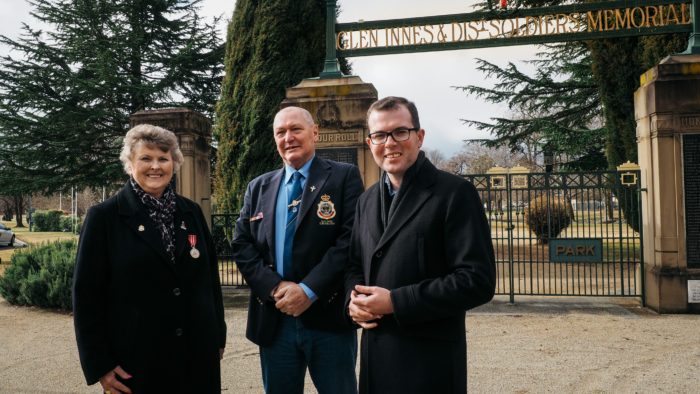 THE memory of Glen Innes war veterans, far from fading, is being retouched as part of a NSW Government program to conserve the State’s war memorials.

The funds are being used to clean and repaint the Memorial’s magnificent gateway and give the cenotaph a new look.

“We need to be sure that there is no dimming of our memory of the men and women who served so that the rest of us could live in peace.

“This funding helps to keep our memorials to these people fresh, and provides for a shared social occasion for some of our living veterans.”

Glen Innes RSL sub-branch President Gordon Taylor was delighted that the funding will help the RSL “keep the memory of our veterans alive for the future”.

“We’d like to express our gratitude to Adam for his work in helping us get these grants,’ Mr Taylor said. “Adam’s input into this community has been exceptional.”

“These memorials have significant heritage value and meaning for their communities, with some commemorating conflicts as far back as the Boer War, which ended in 1902,” Mr Elliott said.

“They also represent more than a century of architectural design history in regional NSW.”

In addition, the Anzac Community Grant Program has awarded 24 grants of up to $2000 to a number of schools, community organisations and historical societies for educational programs and commemorative events.

“The projects being supported by the Anzac Community Grants Program demonstrate an ongoing commitment by the community to recognising Australia’s war service history.”

“Each of these projects has been chosen for funding based on their ability to educate a new generation and support the NSW veteran community.