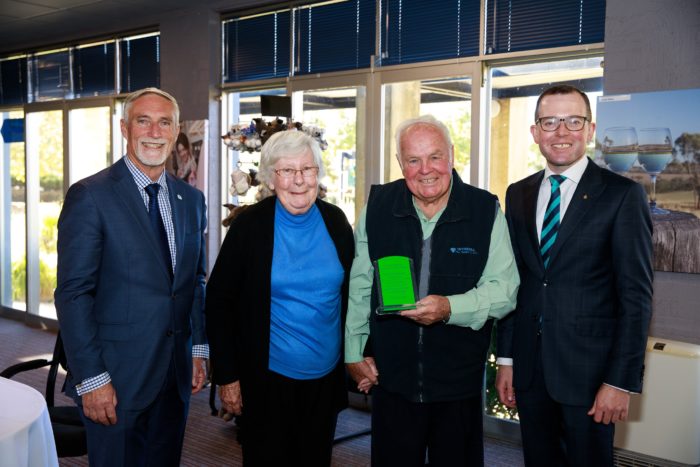 INVERELL tourism advocates and longtime promotors of the Newell Highway, Les and Yvonne Moulds, have this week been recognised for more than 30 years’ service advancing country NSW’s visitor economy, with Northern Tablelands MP presenting the couple with life memberships on behalf of the Newell Highway Promotions Committee (NHPC).

Mr Marshall said the dedication of Les and Yvonne to encouraging tourism and caravanning along the scenic Newell Highway had resulted in millions of extra dollars flowing into rural and regional communities.

“Spanning 1,058 kilometres from Goondiwindi in Queensland to Tocumwal on the NSW Victorian border, the Newell Highway passes through 15 local government areas and is the lifeblood of more than 20 towns and villages,” Mr Marshall said.

“Over a 20-year period in his former role as Tourism Manager at Inverell Shire Council, Les used his association with the NHPC to advocate and encourage tourism in each and every one of those communities, along with towns like Inverell which are only a short drive off the highway.

“Les was the NHPC’s longed serving Treasurer and he worked tirelessly to coordinate multiple brochures to promote the entirety of the Newell – no easy feat when dealing with so many council areas.

“The many years Les and Yvonne spent travelling to major tourism events like the Melbourne, Adelaide and Brisbane Caravan and Camping Shows as the NHPC’s consumer show coordinator is a legacy which rolls along the length and breadth of that road way.

“Known amongst tourism operators as the King and Queen of the Newell, the success of many smaller visitor economies would be far less if it wasn’t for the dedication of this regional royalty.

“It is an absolute privilege to be able to crown Les and Yvonne with this life membership and I thank them on behalf of all Newell Highway communities for their passion for spreading the word about our great part of the world.”

Information on the Newell Highway Promotions Committee can be found on its website www.newellhighway.org.au/route39/