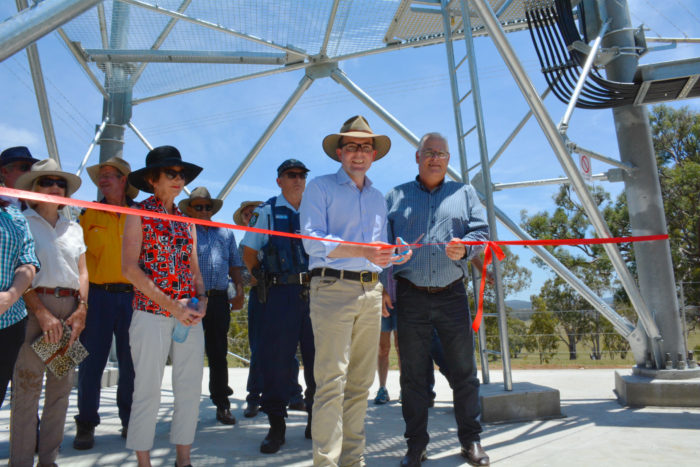 RURAL residents near Kings Plains will spend less time asking ‘can you hear me now’ – with Telstra launching a new mobile phone tower thanks to support from the NSW and Federal Governments.
The tower, which is the 50th launched this year under the Mobile Black Spot Program, is perched on a hill near the Western Feeder Road – improving connectivity for locals and travellers in the nearby area.
Member for Northern Tablelands Adam Marshall cut the ribbon to launch the tower on Friday, saying the signal boost would ‘amplify’ local communications.
“Mobile phone reception is no longer a luxury for rural residents – it’s the preferred way to stay in touch; whether you’re on the lounge, on horseback or heading to town,” Mr Marshall said.
“This new mobile phone tower will give better reception for hundreds of residents and travellers in the area – with many locals to receive service for the first time.
“Mobile phone reception is a key selling point for rural properties, and the installation of this tower will ensure that properties north of the Gwydir Highway will remain competitive with those closer to town.
“The Kings Plains Rural Fire Service (RFS) Brigade will see some of the biggest benefits – the brigade now able to easily navigate and call upon members, even while battling blazes in remote and wooded areas.”
Mr Marshall said the new tower was one of 765 funded across the country – of which 183 are destined for NSW.
“The NSW Government has invested $66.2 million to ensure our state sees the greatest gains from the Federal Government’s $220 Mobile Black Spot Program,” Mr Marshall said.
“So far we have seen 12 new mobile phone towers funded in our region – allowing for clearer conversations, reliable 4G data, safer roads and easier business deals.
“Kingstown, Baldersleigh and Copeton Dam have been identified as priority areas for the scheme in 2018, and the NSW Government is working with the Federal Government and telecommunications companies to see that they’re built as soon as possible.”