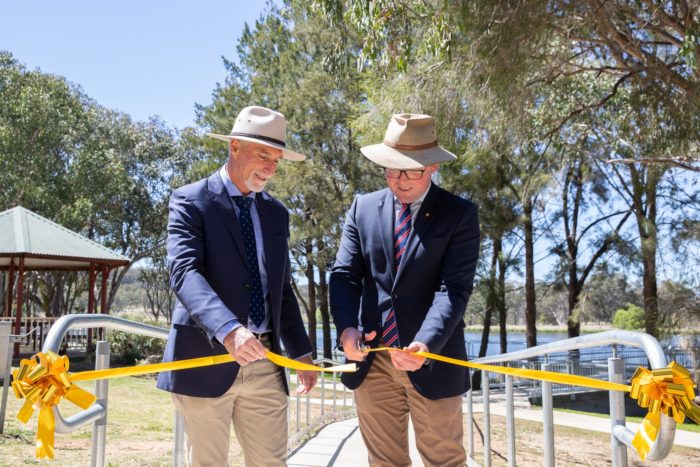 VISITORS to Inverell are now able to get up close and personal with the picturesque Lake Inverell, after Northern Tablelands MP Adam Marshall and Inverell Shire Mayor Paul Harmon cut the ribbon to officially open the $881,606 all access and boardwalk project last Friday.

In 2018, Mr Marshall announced the significant grant through Round 2 of the State Government’s Stronger Country Communities Fund, allowing council to move forward with a bold plan to increase access to the popular recreation area.

“This project has forever changed the way locals and tourists will see and enjoy Lake Inverell,” Mr Marshall said.

“Prior to these works, there was limited access to the lake’s edge for the large number of walkers, kayakers and canoers who like to take in the stunning surrounds.

“Now people can literally walk on water with the boardwalk and extensive pathways providing wheelchair access, while vehicle access has also been increased through the construction of a looped access road with parking alongside the lake.

“Three viewing platforms have been built, with the main one able cater for groups of up to 50 people, perfect for school excursions and large touring groups who might call in for a cuppa.

“Alongside the $1.1 million criterium track, which was opened in March, this area has been transformed into a recreational precinct, which can be enjoyed by people of all-abilities.

“Lake Inverell has been transformed and is now a drawcard for locals and visitors.”

Cr Harmon said Lake Inverell was already one of the town’s most popular recreation venues and he expected the upgrade would allow more people than ever to take in its grandeur.

“Due to its proximity to the Inverell township, Lake Inverell has always been one of those special locations where locals can escape to for a run or walk or to just immerse themselves in nature, without having to travel too far,” Cr Harmon said.

“For those who enjoy paddle sports there is now a specialised kayak launch ramp to assist those with mobility issues to cast off.

“Enviro-tourism will also receive a boost with the boardwalk and walking paths connecting birdwatchers and bushwalkers to the Barayamal National Park.

“In 2017 a community survey rated Lake Inverell as the second-most popular public space in town, used by over 65 per cent of the population. I think if a similar survey was conducted now we could definitely see it take out top spot.

“I want to thank Adam and the State Government for supporting Council to deliver this important community facility, which will provide long term physical and emotional health benefits to our residents, while stimulating the local economy through tourism.”