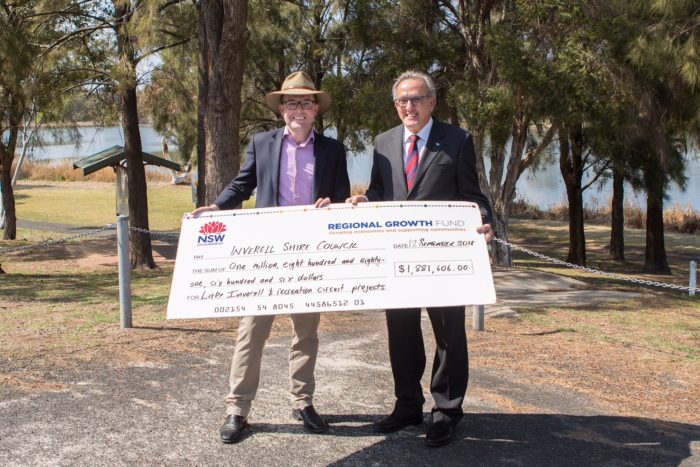 Mr Marshall was in Inverell today, announcing two funding grants from the State Government worth more than $1.88 million for some bold new plans to upgrade lake facilities and build a new criterium circuit alongside the local water wonder.

He was joined by Inverell Shire Deputy Mayor Anthony Michael at the official announcement at Lake Inverell.

A separate $1 million grant has been awarded to build a sealed 1,580 metre off-road circuit for cyclists and runners and walkers along Lake Inverell Drive that virtually links to the foreshore.

Inverell Shire is also chipping in an extra $400,000 towards the recreation circuit project.

“These two projects will not only enhance a popular passive recreation spot that is absolutely picturesque and tranquil but they will also add to the attraction for tourists from outside the area,” Mr Marshall said.

“Lake Inverell is within the town town and very accessible and the reason I think this plan is so spectacular is that it will enhance a real hidden gem in Inverell.

“A 2017 community survey rated Lake Inverell as the second-most popular public space in town, used by over 65 per cent of the population.

“That’s a huge vote of confidence in a local facility so this project will really add to its attraction as a recreational magnet.

“As the Minister for Tourism I can easily see just what the project works will deliver in terms of growing the tourism opportunities here.”

Deputy Mayor Anthony Michael said the lake supported over 3,000 paddle outings by kayakers and canoeists each year and the new infrastructure would increase the appeal and accessibility of those sports while providing an easier path for disability access.

“This is a big win for the community,” Cr Michael said.

“Projects like these are what we dream about and Adam Marshall has helped make this happen for us.”

Mr Marshall said the council was proposing upgrades that will retain the pristine environmental aspect of Lake Inverell, but bring much needed new access and amenities to the reserve.

The new launching facility would give safer and easier access from land to water, provide viewer platforms for visitors, and improve the walking tracks around the lake.

The new off-road circuit will provide round the clock free use for cyclists, residents, school sports groups, wanderers both able and with a disability, and triathlon athletes of all ages.

“It gives them all a safer, sealed off-road path of over 1.5km that takes you almost to the shoreline of Lake Inverell.”

Mr Marshall said the council had struck a great balance with the inter-linked projects by coming up with a plan that preserves Lake Inverell’s natural beauty but updates the reserve to make it even more welcoming and accessible for Inverell residents and tourists.