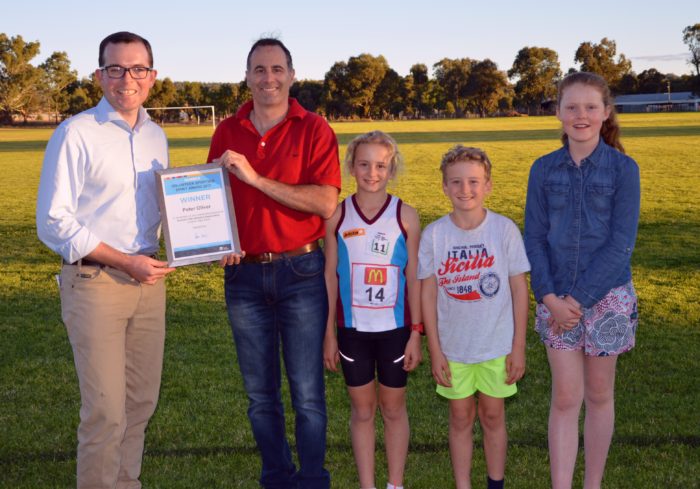 IT takes a lot of dedication, love and caffeine to have sporting kids. Countless early starts, long drives and late training sessions can be a marathon in itself – but Inverell’s Peter Oliver has gone above and beyond for youngsters across the district.

“Peter is a great contributor to the club, and is helping ensure Inverell continues to grow as a centre for sport and athletics in the Northern Tablelands,” Mr Marshall said.

“He donates hours each week – spending whole days supporting the Little Athletics Association whenever a carnival or zone final comes along. While it’s fun – it’s a long day’s work, particularly when a final means travelling to Gunnedah or Lismore.

“It was an honour to present Peter with a Volunteer Sporting Spirit Award, as well as a sports voucher as a token of our appreciation.”

Mr Oliver started helping with the club when his daughter Matilda signed up a few years ago – and was promoted to an assistant coach last year, thanks to a $1,760 NSW Government sporting grant.

“I just roll up each week and help where I can. It’s only for an hour and a half, but then there are the carnivals and Inverell’s Gala Day – which is a very big day and a massive day for the town,” Mr Oliver said.

Mr Oliver said he’s now preparing for a big year in athletics, and urges kids to try it out – with suitable encouragement from parents.

“Kids are getting outdoors and actually exercising – that’s a huge benefit,” he said.

“They’re out and about, they’re learning skills like distance running, or finding natural ability in shotgun, javelin or high jump. They can be nurtured, encouraged and shown the right skills to take it further.”