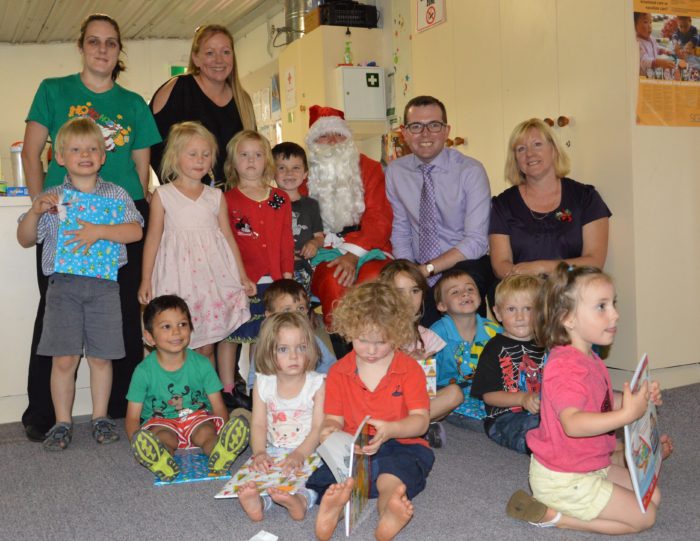 SANTA made an early delivery to the village of Kingstown, west of Uralla, yesterday as the community came together to celebrate the resurrection of the Kingstown Preschool.

Member for Northern Tablelands Adam Marshall was on hand to cut the cake and join in the festivities as the little preschool – which was closed by the previous operators at the end of term three this year – celebrated its revival.

Mr Marshall said given just three weeks’ notice of closure the community led by a hastily convened group of local mothers stepped forward and began the fight to win back the important service in this remote village.

“I am a strong believer in people-power, but this was truly a case of little-people power as a group of mothers, initially led by Kingstown’s Kylie Vincent and Josephine Tonkin, took up a big challenge to save the service,” Mr Marshall said.

“As can be imagined, there was loads of red tape and hoops to jump through, but this group came together and saved the preschool.

“It was a most impressive result and, joining them today for the celebrations, I can see that it well worth it.

“Student numbers doubled from seven to 13 and their smiling faces today are a great testament to the importance of early childhood learning.”

The Preschool committee secured the services a new director Heather Fintelman and educator Alecia Bateman to manage the facility which is located in the Kingstown Memorial Hall, adjacent to the Kingstown Public School.

“The value in having local early education facilities such as the Kingstown Preschool is that the children have the opportunity to ‘grow’ into big school and get the best start they can in their education,” Mr Marshall said.

“I congratulate all those who worked to ensure the preschool’s future and thank the Minister for Early Education Childhood Education Leslie Williams who facilitated licensing and funding for the group so quickly.”