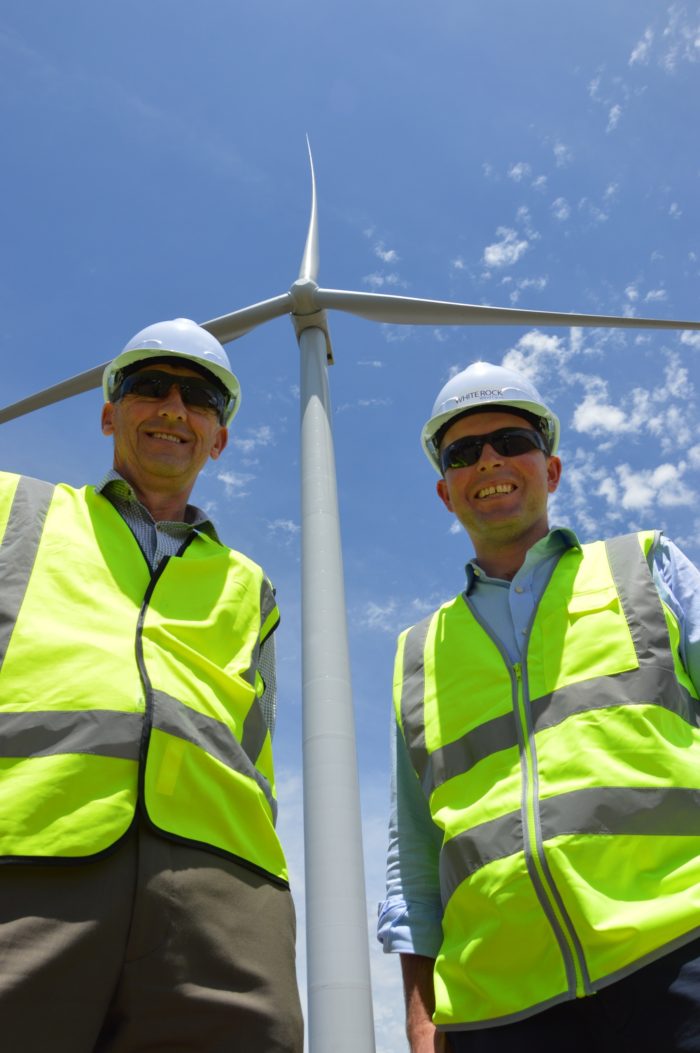 IT’S been years in the making – but now the windfarm atop White Rock mountain is quickly becoming a reality. All 70 pads for stage 1 are now complete – with the first two turbines now standing proudly above the Glen Innes district.

“Photos and stat sheets can’t truly convey how incredible this technology is,” he said. “While it looks certainly impressive from a distance, it’s only when you get up close that you understand the sense of scale. A family could probably live inside one of the pylon segments quite comfortably.

“This is an enormous project not just in terms of scale, but its impact on the local community. Glen Innes is going gangbusters with property prices surging, rental properties largely booked out and strong investment in local businesses.”

“We appreciate the ongoing support of the local community including the strong support from our local MP and Mayors in reaching this important project milestone.”

During the construction phase, up to 280 people are involved in earthmoving, concreting, assembly and electrical work.

“I think it’s really lifted and boosted the spirit of Glen Innes, seeing more people around, seeing more activity and more money spent in town. It’s a positive to see this form of renewable energy being at the front door of Glen Innes,” Cr Toms said.

“It was an eye opener to see the amount of machinery and activity going on, and progress with the wind farm to see the first tower fully erected. It’s the first windfarm north of Sydney, so it’s quite significant in terms of what most people would have seen before.”

When completed later this year, the White Rock windfarm will produce 175 megawatts of electricity, or enough to power 75,000 average homes. Mr Marshall says it’s a crucial step towards NSW hitting its Australian and international climate obligations.

“Projects like the White Rock wind farm are vital to keep the state progressing towards its goal of net zero carbon emissions by 2050. To reach the target, we need to continue developing large scale renewable arrays like this and the Northern Tablelands is the perfect location for the industry.”

“With Inverell’s Sapphire wind farm to follow shortly after White Rock, we’re building some serious momentum and scale of capacity in the Northern Tablelands.”