LOCAL SCHOOL TO SAVE THOUSANDS ON ENERGY WITH NEW SOLAR SYSTEM 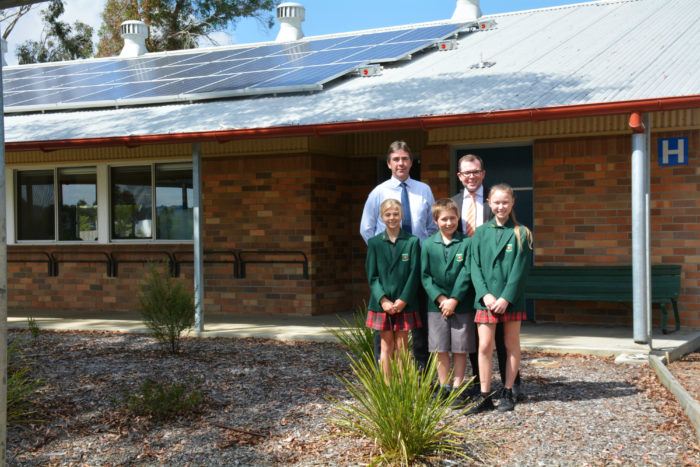 LOCAL SCHOOL TO SAVE THOUSANDS ON ENERGY WITH NEW SOLAR SYSTEM

ARMIDALE’S Newling Public School will save thousands of dollars from its power bill each year thanks to a NSW Government investment in renewable energy, Member for Northern Tablelands Adam Marshall announced today.

Mr Marshall said the bumper savings come from a 15 kilowatt photovoltaic rooftop solar system recently, installed recently on the roof of one of the school’s classroom buildings, following a $16,287 NSW Government grant.

“These solar panels will save Newling Public School thousands of dollars each year, while also minimising the impact the school has on the environment,” Mr Marshall said.

“Since these 54 solar panels were installed in January, the school has been generating more power than it uses during the day, putting energy back into the grid to be used by our local community.

“This simple investment under the Small Schools 15kW Solar Project will be paid off fully in four years, and provide substantial savings well into the future.

“During its operation, it can also provide a valuable demonstration to students about the opportunities and benefits of small scale renewables, providing a more practical understanding of this major new industry for our region.”

Mr Marshall said the project was one of 10 school solar projects funded by the NSW Government state-wide, each delivering savings of $4,200 per annum.

“The kids can think logically about inputs and outputs and analyse that data and make predictions. In Maths and Science we talk about sustainability, now we’ve got a great demonstration in the heart of our school,” Mr Cox said.