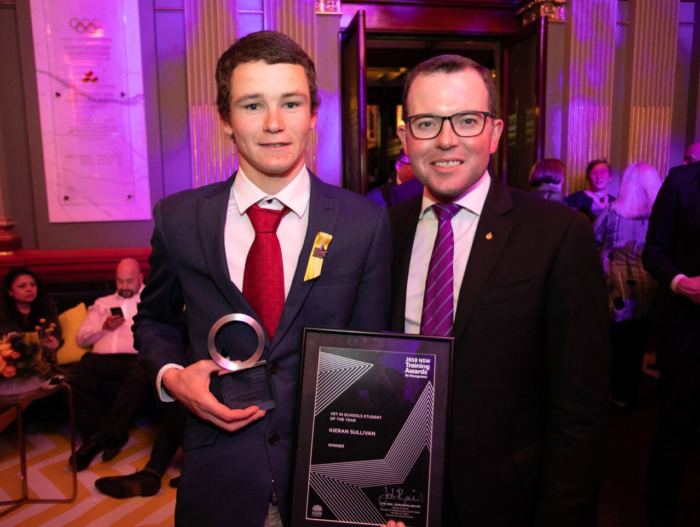 URALLA student Kieran Sullivan has taken out the VET (Vocational Education & Training) in Schools Student of the Year award at the 2018 NSW Training Awards last night in Sydney.

Member for Northern Tablelands Adam Marshall attended the award ceremony at Sydney Town Hall and personally congratulated Kieran, saying he was honoured for his vocational studies in Agriculture which was part of his HSC at Farrer Memorial Agricultural High School in Tamworth.

“Kieran is officially the best of the best of all students right across NSW and has done himself and his family very proud,” Mr Marshall said. “It’s a huge coup for Keiren and our region.

“I congratulate Kieran on winning the VET in Schools Student of the Year award and wish him all the best when he represents NSW at the Australian Training Awards in Sydney in November.

“Kieran is no stranger to awards claiming various academic prizes at school including the highly contested Arthur Heath Prize which is awarded to the most capable and academically gifted agriculture students.

“During his work placement, Kieran’s employer said he displayed a maturity beyond his years in completing the tasks that he was given.

“He has also excelled in extra-curricular agricultural activities including being an associate judge at the Armidale Cattle show and being accepted into the elite University of New England’s Growing Regional & Agricultural Students in Science (GRASS) program.”

Kieran said his passion for agriculture and completing vocational studies while still at school would make him more employable after his HSC.

“The course has given me a wider knowledge of the industry including the importance of sustainable management of agriculture as farming land that’s vital to feed the growing population is under pressure from urbanisation,” Keiren said.

Deputy Premier and Minister for Skills John Barilaro said the students, educators and training providers represented at the NSW Training Awards were living proof NSW’s Smart and Skilled VET system was a first-class choice for a rewarding career and lifestyle.

“We’ve committed $2.2 billion to skills development initiatives in the recent Budget including $285 million to make all apprenticeships fee-free over the next four years so we expect to see many more VET students emulate Kieran’s success in future,” Mr Barilaro said.

The NSW Training Awards are conducted annually by the NSW Department of Industry in recognition of outstanding achievements in VET.

HISTORIC ST MARK'S BEREEN CHURCH TO BE REBORN WITH $14,850 GRANT