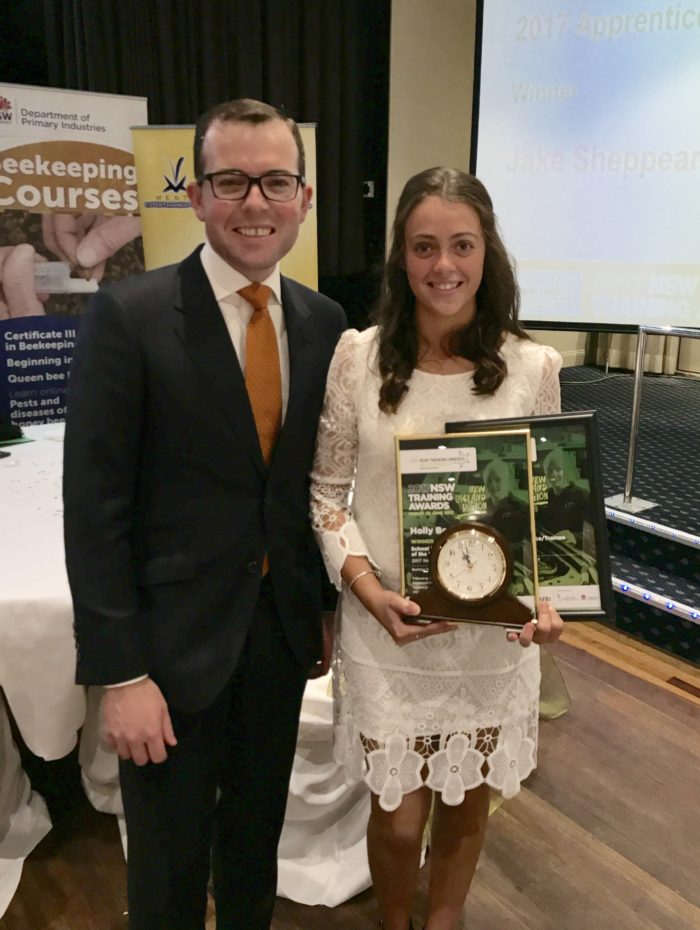 MEMBER for Northern Tablelands and Assistant Minister for Skills Adam Marshall has congratulated four local trainees who have been named winners at the 2017 New England Region NSW Training Awards.

Mr Marshall crowned the winners at an awards ceremony in Tamworth last Friday, commending them on their hard work training at TAFE NSW and in the workplace.

“All four local winners have demonstrated incredible drive and passion in their chosen field to get them to this point,” Mr Marshall said.

“Their dedication and persistence will make them excellent cooks, mechanics and businesspeople – and I wish them the best of luck in their promising careers.

“There was a great array of local talent in the room – but I’m particularly proud of the winners in the Northern Tablelands; Armidale, Glen Innes and Inverell trainees who will no doubt significantly contribute to the culture, economy and industry in our patch.

“Almost 50,000 people complete their apprenticeships and traineeships in NSW each year – around 2,300 in our region – and these dedicated trainees represent the cream of the crop.”

Armidale student Gordon Cooke took home the Phil Darby Memorial Award, encouraging promising trainees or apprentices. Mr Cooke has been pursuing a career in Cookery since the age of 15 – and has chosen a Certificate III in Commercial Cookery to make his dream a reality. He works at the Goldfish Bowl.

Michael Brooks, also studying in Armidale, won the Excellence in Trade Skills Award for his dedication pursuing accreditation via a Certificate III in Commercial Cookery. In less than three years, Michael has achieved his lifelong dream of becoming a qualified chef.

Glen Innes’ Kaelia Fields was crowned VET in Schools Student of the Year for her Automotive Vocational Preparation Certificate II course, which helps lay the groundwork for a career as a mechanic. After taking a work placement, her employer was so impressed that he offered her a school based apprenticeship – an investment that now has certainly paid off!

Inverell’s Holly Bourke has earned the School Based Apprentice or Trainee Student of the Year award for her passionate pursuit of a Business Certificate II while at the Commonwealth Bank. Holly will have another further round of interviews in July to find out if she will progress as a state finalist. Holly’s dream is to one day manage a Commonwealth Bank branch in country NSW.

Mr Marshall said each and every one of the trainees were on their way to a successful career.

“Work placements are a great way for young people to learn practical skills to complement their apprenticeship or traineeship – and this year’s winners are a practical example of that,” he said.

“Modern life means juggling earning and studying – but every local winner this year has been able to balance those two responsibilities, and thrive under that pressure.

“I wish them the best of luck in their future careers, and commend their employers for helping them to develop essential skills for the workplace.”