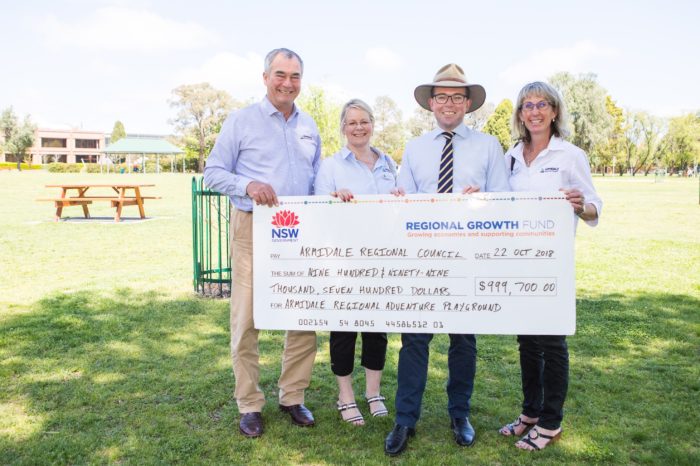 ARMIDALE will soon get an amazing new adventure playground including all the mod-cons of contemporary play things with the announcement of a $1million dollar project by Northern Tablelands MP Adam Marshall yesterday.

Civic leaders and children’s advocates joined Mr Marshall in Armidale yesterday to outline details of the funding and building project which will see an overhaul of Curtis Park to convert a section of it into a state-of-the-art outdoor play space.

Mr Marshall announced the NSW Government was kicking in $999,700 for the playground near the Visitor Information Centre that would significantly upgrade recreational facilities for residents and visitors in the Creeklands area.

Mr Marshall said he’d backed the project all the way after Armidale Regional Council came up with idea of a ‘super park’ in the heart of the city earlier this year.

“Parks are integral to regional communities and can make or break a town’s reputation with families,” Mr Marshall said.

“Having somewhere safe and engaging for children to play is a necessity and this playground will tick all those boxes and plenty more.

“About 20 percent of the population of the council area here is aged under 15, so you can just imagine the enormous potential for use of a playground of this capacity.

“Many locals are familiar with the regional playground in Tamworth on Kable Avenue – it’s always packed with families and out-of-towners with safe playing spaces for kids of all ages and entertainment for hours.

“This park will embrace that concept and in fact dovetail with plans to revitalise the entire Creeklands area, creating a huge space that will become one of Armidale’s major community assets.

“It will also serve as another attraction to encourage people traveling up and down the New England Highway to turn off at the roundabouts and come into the city.”

He said the playground would have dedicated play areas for toddlers, younger children and school-aged kids, as well as a cable playzone, sand and water zone, musical play equipment, swing zone, and an open parkland area for ball sports.

“It will have fencing, lighting, CCTV security, connection to services, and a new bridge across Dumaresq Creek,” Mr Marshall said.

“It will have a range of play equipment and landscape structures that are intended to stimulate the imagination of children while they play.”

Mr Marshall said plans included play equipment housed on close to 1,000 square metres of soft fall and with multiple picnic areas and barbecues and new amenity block that will be fully wheelchair accessible.

“Another key feature of the park will be the inclusion of play equipment that can be used by children of all abilities, including those in wheelchairs,” he said.

Armidale Regional Council Mayor Simon Murray said the location in Curtis Park would further strengthen the parklands as a social hub and he expected to see it attract people from right across the region.

“The super playground will be a fantastic asset for our regional community, to keep our kids active – physically and mentally – and encourage families to spend interactive time together,” Cr Murray said.

“It will also be a further attraction for people, especially young families, to settle in our region or for an extended stopover as they are travelling through.”

The council said there was still detailed design and the tender process to undertake but it was tentatively aiming to start construction in mid-2019 if things went to plan and process.