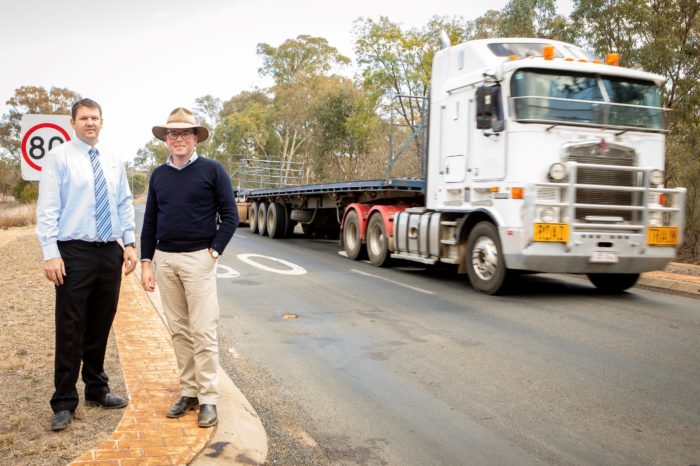 NORTHERN Tablelands MP Adam Marshall today announced that one of Inverell’s busiest freight links will undergo a major $700,000 upgrade, with work to begin next week to improve the road pavement on Jardine Road, known locally as the Western Ring Road.

The State Government has provided $300,000 toward the project, through the Drought Support Program, and Inverell Shire Council will invest $400,000, to increase safety for heavy vehicles moving freight along the Gwydir Highway.

“The western ring road diverts traffic to the north of Inverell and through the industrial area, limiting the amount of heavy traffic which travels through town.

“Over the next month council will totally rehabilitate a five hundred metre stretch of the road by adding new gravel and patching isolated areas where the road surface has broken up.”

Mr Marshall said added project compliments the recent drought stimulus announcement of $2.2 million to install a roundabout at the notorious intersection of the Gwydir Highway and Bundarra Road.

“The NSW Government is making the regions freight network more efficient while stimulating Inverell’s economy at the same time,” he said.

“I’m pleased projects like Jardine Road and the new roundabout are being supported because road freight is the lifeblood of the Northern Tablelands and unless farmers and manufacturers can get their products to and from market quickly and safely the economy will come to a stop.”

Motorists using Jardine Road are urged to take care with the works expected to be complete by the end of August.