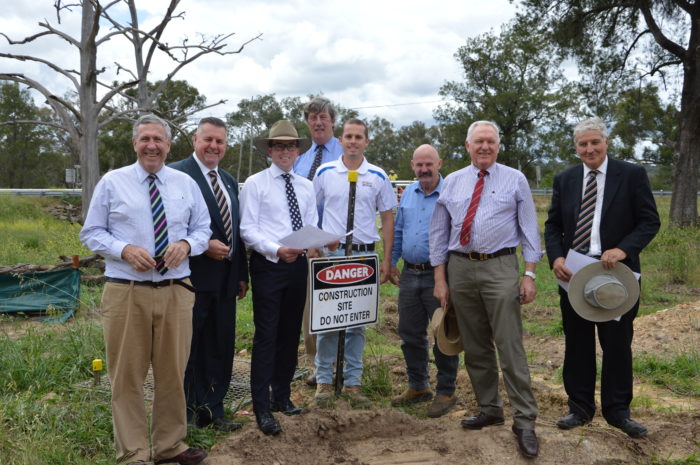 MINISTER for Roads Duncan Gay and Member for Northern Tablelands Adam Marshall today inspected the start of major work under way on the new Abington Creek Bridge on Thunderbolts Way, near Uralla.

The NSW Government has provided $705,000 for the new bridge through its Fixing Country Roads program and is jointly funding the $1.45 million project with the Federal Government and Uralla Shire Council.

Minster Gay said Fixing Country Roads was one of the NSW Government’s flagship programs for the bush and that the work being undertaken to build a new Abington Creek Bridge was testament to the program’s success.

“Only recently we announced round two of the program was open with a further $50 million available to councils to help repair council owned roads and bridges and improve regional road and freight pinch points in country NSW,” Mr Gay said.

“The existing Abington Creek Bridge is a narrow, single-lane timber bridge on a dangerous bend that can be a bottleneck for motorists and heavy vehicle freight travelling between Inverell, Uralla and Armidale.

“By replacing this bridge and building a new one – we are helping ensure freight movements in and out of town centres such as Armidale are safe, efficient and timely.”

Mr Marshall said the new bridge over Abington Creek would be 45 metres long and eight metres wide. It will be a modern concrete bridge with two lanes and is being built on a new and improved road alignment.

“Piling work to build strong foundations for the bridge is now well under way. The next stage will be to install girders so the bridge deck can be built,” Mr Marshall said.

“The community can’t wait for April next year when the new stronger and safer bridge and road approaches are expected to open to traffic.

“The new bridge will have huge benefits for everyone in the North West of the state, helping ensure the efficient transport of freight and goods in the area – which will have a positive flow on effect to local businesses, farmers and residents.”