MAKEOVER ON THE WAY AND BEAUT NEW FACELIFT FOR NERAM 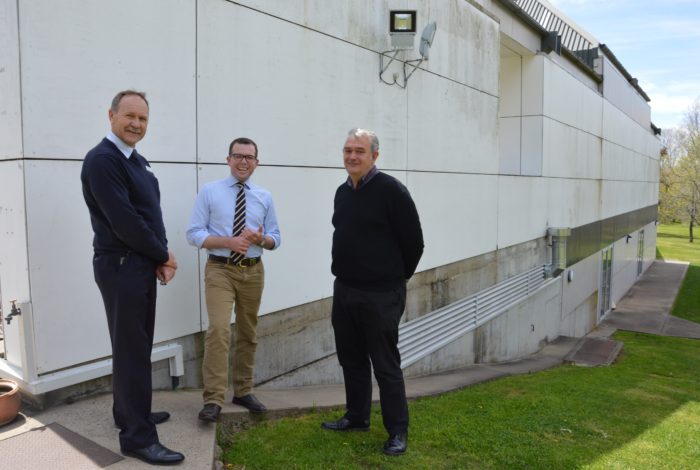 ARMIDALE’S New England Regional Art Museum (NERAM) is closer to having a new and refreshed facelift with a $60,000 State Government grant, according to Northern Tablelands MP Adam Marshall.

The cultural complex in Kentucky Street is waiting on cosmetic surgery to replace the cladding on the exterior of the building – giving it a dash of fresh colour, the first since it was built more than 30 years ago.

Mr Marshall said the grant would help boost the treasure chest being compiled to allow the museum to replace what had become a dilapidated external surface and increase the insulation capacity of the building.

“The existing fibre cement sheeting on the exterior is weathered and has cracked extensively and there’s also a bit of mould, but the facelift is more than just a cosmetic job, it’s also a financial and environmental one too because the new cladding will improve energy efficiency too,” Mr Marshall said.

“The project also involves work on the insulation in the sub wall which has deteriorated to the point of being ineffective, so this would make it more sustainable and obviously more cost effective in relation to energy use.

“Besides giving it more effective exterior protection it will also reduce ongoing maintenance and running costs and as we all know this can be a major factor for us on the tablelands given the tough weather extremes we experience.

“The makeover would also lift the outward face NERAM, which is the most significant cultural facility in the New England/North-West area, attracts around 40,000 visitors, and is a key creative hub in our region.”

NERAM director Robert Heather hopes the work will be undertaken in early 2017 but it first has to secure the balance of the project cost of $315,000.

Mr Heather is waiting on confirmation of a Stronger Communities Funding grant of $240,000 through Armidale Regional Council from the State Government which will also boost the finances and says the shortfall then of a final $15,000 will be achieved through NERAM fundraising.

“We are very excited to receive this funding as it will enable NERAM to present itself as one of the leading regional galleries in NSW with world standard facilities to match our outstanding art collections,” he said.

“The refurbishment of the insulation and external skin of our building will also support us in reducing the cost of our power bills through improving our energy efficiency.

“The support of the NSW Government and the Armidale Regional Council will be making these essential updates possible and help us to work closely with our community to improve access to a wide range of artistic and cultural activities.”

Mr Heather says while there had been small works on the building at various stages over the past 30 years – the air conditioning system was replaced a couple of years ago and the Packsaddle Art classroom and studio was installed a few years ago – this would be the biggest building project there since 1997.

Mr Marshall said the latest $60,000 grant for NERAM was under the Arts NSW Regional Capital program for important infrastructure projects.