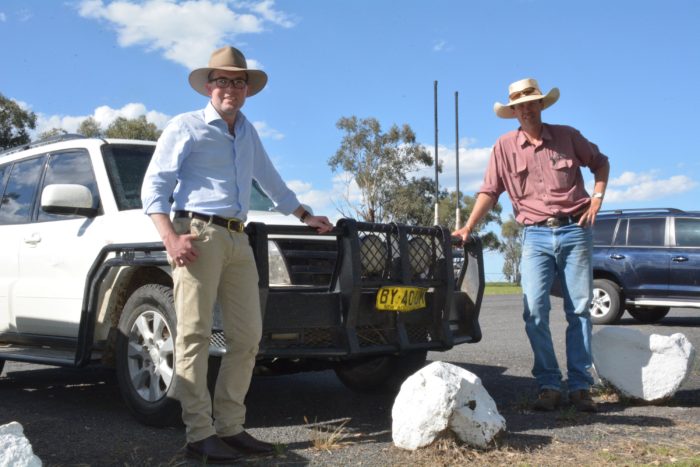 Northern Tablelands MP Adam Marshall with Inverell’s Tom Oakes and his five-post bull bar, which has been made legal for good across NSW.

NORTHERN Tablelands MP Adam Marshall has announced the positive outcome of his five-year campaign to introduce clearer guidelines around bull bars and provide motorists with greater peace of mind and permanent certainty in NSW.

A temporary Ministerial Order was put in place in late 2014 to protect motorists with non-compliant bull bars from being fined and prosecuted while the NSW Vehicle Standards Working Group finalised their report.

The order was made permanent on 16 September this year.

“This is a great outcome for country people and a huge victory for common sense,” Mr Marshall said.

“While it took about five years, it does deliver certainty and a set of clear and consistent guidelines to motorists and industry stakeholders to help ensure any bull bar that they purchase, sell, install or manufacture for sale is permitted under NSW regulations.

“Bull bars, especially strong five-post bars, are essential for many people living in rural areas, protecting vehicles and, more importantly, protecting people’s lives on our country roads with huge numbers of kangaroos and other animals around.”

Mr Marshall said a permanent exemption would allow the continuation of a ‘degree of tolerance’ from the Australian Design Rules for vehicle frontal protection systems, which were enacted by regulation on 1 January 2003.

“The tolerances in the exemption have been working well during the past five years under the Ministerial Order and I am very pleased to see this is now in place for good.

This means that those people with a properly manufactured and fitted five-post bull bar need not worry about being targeted by Police or fined.”

“These arrangements were made permanent through an amendment to the Road Transport (Vehicle Registration) Regulation 2017.”

The technical specifications will also ensure vehicles meet applicable standards affected by the bull bar, such as ground clearance, width, obscured lights and number plates, and the driver’s view of the road.

Details of the requirements for bull bars can be viewed at