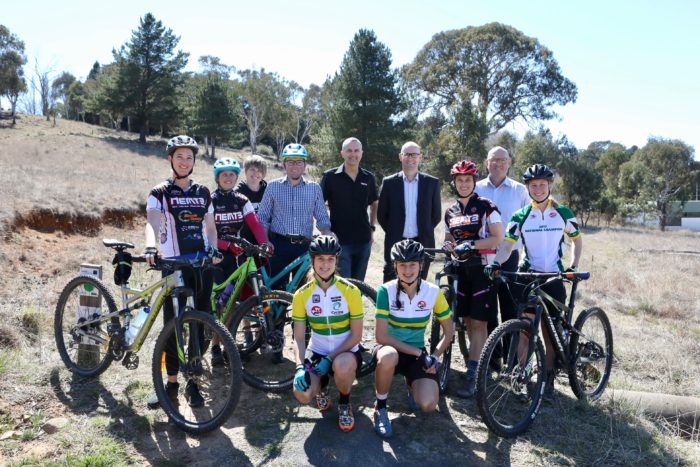 A GRANT of $147,780 delivered by Northern Tablelands MP Adam Marshall today will give the New England Mountain Bikers a winning run up ahead of hosting a world title championship event in 2020.

Mr Marshall announced the funding at the club’s trail complex at Sport UNE this morning, saying it would put the Armidale in the box seat for hosting world class events in mountain bike trail riding.

The money will go towards constructing five kilometres of new trails at the mountain bike track in the SportUNE sporting precinct.

“I’m absolutely thrilled to be delivering this grant funding for New England Mountain Bikers to expand the mountain biking trails by over 5,000 metres and create spectator seating and a walking track around it,” Mr Marshall said.

“This Project Gonzo will really push our reputation as an international sporting leader in mountain biking and as the Minister for Tourism I’m delighted to have a hand in bringing funding into this electorate that will achieve so much in getting tourism dollars into this region via sporting tourism visitation.

New England Mountain Bikers president Peter Hosking said the funding would allow the club to extend its current biking trail loop by some 50 per cent, improve a great asset for the local community but also provide a legacy for holding more elite and big title events.

“We needed a longer trail to the host the World Endurance Mountain Bike Organisation championships but this is even bigger than that,” Mr Hosking said

“It will bring $1 million visitation into the region and grows the infrastructure of the facility and it will really open up our ability to hold more events and variation.”

The local club has some 150 members but the Sport UNE biking trail sees more than just mountain bike riders using a facility that is open and accessible to the public, including recreational riders, runners and walkers.

“It is open to the wider community, and the new mountain biking trails will increase the use of shared infrastructure, support the region’s economic growth, and benefit the health and well-being of the whole community,” he said.

The new mountain bike trails will be installed on an elevated site to the north of Ring Road, within the SportUNE sporting precinct.

The club will now look to secure a professional track builder to put the extra trails into place and have the new 13.5 metre loop ready for action for the Oceania 24-hour endurance championships, a virtual grudge match between New Zealand and Australia mountain bikers, set down for November 2019.

Mr Hosking said that would be a test run or trial but a much smaller scale event ahead of the WEMBO event in 2020.

Mr Marshall said the WEMBOs could expect to see some 70 to 100 international riders compete, but with about an extra 200 support visitors as well, along with up to 250 Australian and local riders taking part.

“The key thing for that international event will be the amount of time visitors will spend in the region, not only ahead of the endurance race when they’re likely to come earlier to acclimatize, but also to spend other time in and around the region as tourists,” Mr Marshall said.

“It will be the first time NSW has ever hosted these championships and it’s quite appropriate they will be in Armidale. It is a massive achievement for the region for Armidale to secure the rights to host the 2020 24 hour World Endurance Mountain Bike Organisation championships.

“It is the biggest event on the endurance mountain biking stage. The 24 hour world titles began in 2012 and have been taken all over the world and the 2020 championships will be the second time Australia has hosted – with Canberra holding the 2013 event.”

Mr Marshall said Armidale was riding a wave of success as a leader in mountain biking and has already hosted the Cross Country Olympic national championships and two national series rounds in 2017.

“We’ve got a great track record when you look at what Armidale and the New England Mountain Bikers have already achieved but this will take us to a whole new level,” he said.