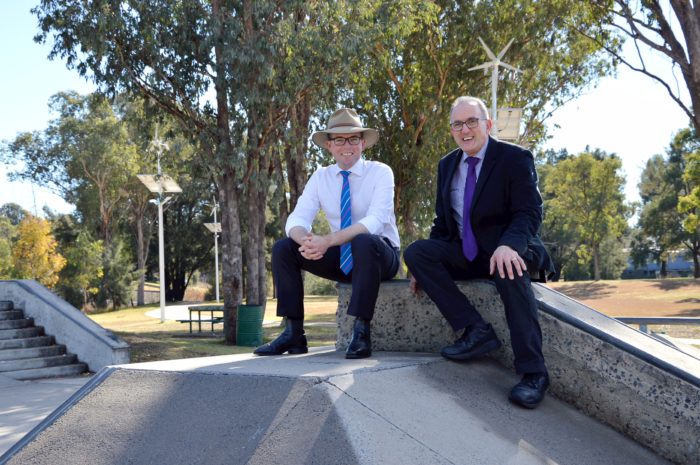 INVERELL’S Skate Park is already one of the most popular venues for young locals on the weekends and school holidays and is now the subject of a council plan to expand the facility to make it even more family-friendly.

Northern Tablelands MP Adam Marshall is keen to see the skate park grow and is throwing his support behind a push to secure $50,000 in State Government funding to add additional park area and facilities to the venue.

“This project was directly identified as a priority by Inverell locals and I’m delighted to throw my full support behind this expansion and ensure we secure the $50,000 to kick start construction,” Mr Marshall said.

“The current Park is in great condition with a variety of ramps and areas for people to skate. However, it is a little advanced for beginners and younger children, and has no adjacent facilities other than a small gravel car park.

“This money will change that by funding the expansion of the Skate Park to include specially designed extension that is suited to younger children and beginners, and will also give safer gradients for novice scooter riders to practise their skills.

“The proposed expansion also includes picnic shelters, tables, shade facilities and a public BBQ area to allow the entire family to enjoy the area while their children skate safely nearby. The car park would also have safety bollards installed for added protection.

“The expansion would mean that everyone would be able to enjoy the park – with younger, less advanced riders safely tackling their custom area while more experienced riders and teenagers able work on their tricks in the more difficult areas.

Mr Marshall said parents would be able to enjoy a family outing and supervise young children from the comfort of the picnic area – something they are currently unable to do.

“I’m sure many parents of keen young skaters and scooter riders would like to host ‘skate park’ birthday parties – this expansion would allow them to do just that,” he said.

“This would be a great boost to the Park facilities and allow us to cater for the younger children who aren’t currently catered for here,” Cr Michael said.

“Any outdoor activity for children is always great for the Inverell community and this expansion would families to enjoy the Park together.”

Inverell Shire Council has put in an application to the NSW Government for $50,000 of the projected $100,000 project. If secured, the Skate Park would expand to be a 216m2 facility.