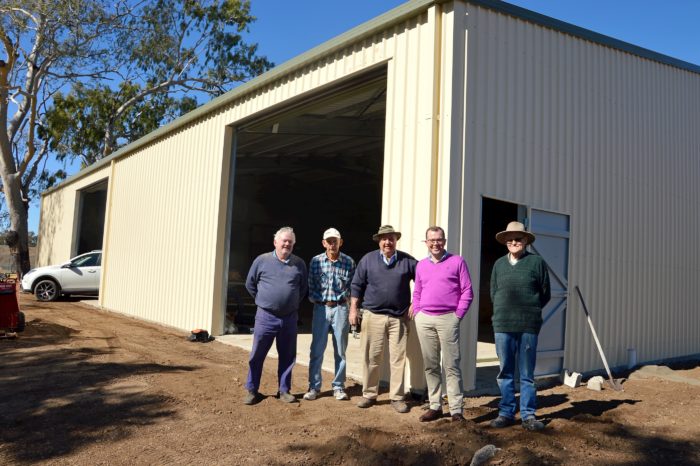 THE Taj Mahal of tool sheds has been constructed at the Moree Showground, with the new purpose-built Moree Mens Shed now busily being fitted out by local volunteers.

Northern Tablelands MP Adam Marshall called in on a working bee at the Mens Shed last week, inspecting the concrete pad and 18 by 24.1 by 4.2 metre Ranbuild shed where the town’s hard-working retirees will soon be calling home.

Mr Marshall said he was blown away by the scale of the shed, which will soon become the new flood-proof permanent home for the Mens Shed.

“I am so pleased to see this new shed constructed, which is nearly double the size of the old, leaky and flood-prone building on the showground, which the local Mens Shed have called home for many years,” Mr Marshall said.

“This new shed has been many years in the making, with the local members desiring a new home, out of the reach of floodwaters since 2011 when a metre of water went through their existing facility.

“Over the coming month’s volunteers will work to fit out the space building a kitchen, installing air conditioning, a storage area, wood and metal working spaces and sound proofing the building so as not to encroach on the other groups and people who utilise the showground.

“Many of Moree’s Men’s Shed members are retired farmers or tradesman, used to working in industries where their minds and hands are active.

“This facility is incredibly important in reducing social isolation and combating depression that often sets in in tough times or when men become less busy in retirement.”

“For years we were stuck down at the back of the showground where nobody could see us or the fantastic work our members create – now we are front and centre,” Mr Sampson said.

“The good thing about our new location is it’s high visibility from McElhone Street, so anyone who drives past can see who we are and the projects we are working on.

“While our old shed served us well it wasn’t practical for an organisation which has lots of elderly members. A lack of toilet facilities, heating and cooling is was inconvenient for many of our supporters and restricted the organisations ability to grow.

“We are looking forward to having the shed operational and getting back to what we do best, building, restoring and having a good yarn.”