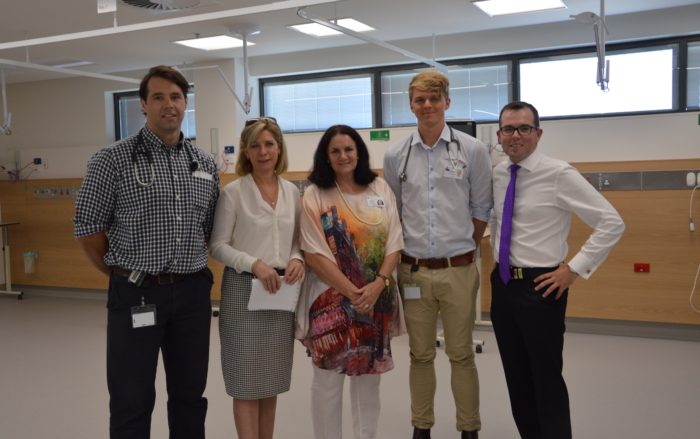 ARMIDALE’S new $60 million four-storey hospital building will throw open its doors this weekend, giving people from around the district an opportunity to see the future of the region’s healthcare first-hand.

Member for Northern Tablelands Adam Marshall today invited all members of the community to join him on a guided tour through the new Emergency Department, General Medical Unit and medical wards this weekend.

“The community has watched over the last 15 months as this giant building has taken shape and now they have a once-only exclusive chance to see it inner workings before patients start being admitted,” Mr Marshall said.

“As the hospital moves towards completion, this will be your best chance to walk through key areas, see how it will appear and talk to health professionals about the boost to services.

“If you’re at all interested in the region’s future of healthcare, I’d encourage you to join with me in touring this world-class facility on Saturday.”

Mr Marshall said crews were placing the final touches on the building ahead of a grand opening next month.

“I’ve been lucky enough to visit the Armidale Hospital redevelopment many times over the past 15 months of construction and I’m confident the community will find the new four storey building just as impressive as I do,” Mr Marshall said.

“Medical staff have begun acclimatising to the new workplace from today, learning about new equipment, facilities and processes in the new building.

“From next week, medically sensitive areas will be sterilised to a clinical standard and staff will transition to the new building as it becomes an operating hospital.

“After a decade of discussions, from next month this new facility will no longer be a distant ambition or a construction project it will simply be Armidale’s Hospital.”

The Armidale Hospital Open Day will be held on Saturday, 17 February, between 11am and 1pm. A free barbecue lunch will also be on offer.