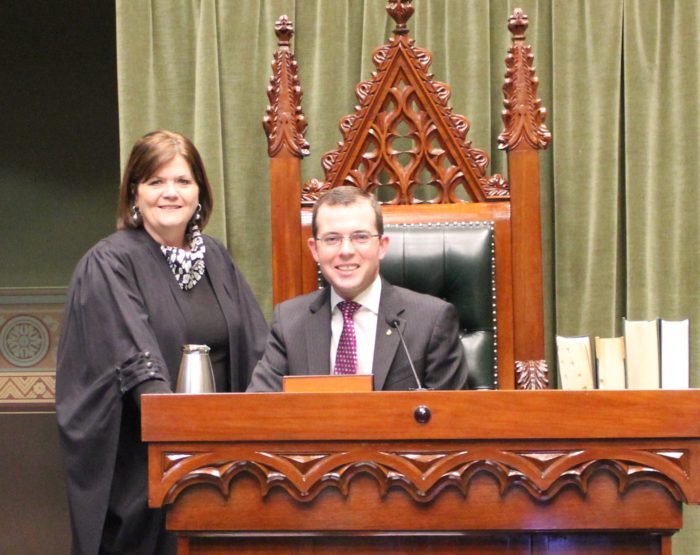 Taking his place in the Speaker’s Chair, Temporary Speaker Adam Marshall is pictured with Speaker of the Legislative Assembly Shelley Hancock.

MEMBER for Northern Tablelands Adam Marshall will again fill the role of Acting Speaker of the NSW Legislative Assembly after Speaker Shelley Hancock made the announcement about Mr Marshall’s appointment to the Speaker’s Panel last week in Parliament.

Mr Marshall will receive briefings tomorrow morning from the Clerks, for the role which will see him take charge of debates in the Australia’s oldest Parliament when the Speaker is not in the chair.

“I’ve previously served in this role in the last Parliament and have chaired a lot of meetings in my time as a Mayor and as head of various boards, but with a brand new Parliament, which so far is more combative than the last, there could be some testing times ahead,” he said.

“There are a lot of protocols to re-familiarise myself with as well as the many procedures and duties involved with the role.”

Starting tomorrow, Mr Marshall will regularly act as the Speaker during Parliamentary sittings, chairing business sessions and debates on legislation in the Legislative Assembly.

“I’m looking forward to returning to this role and serving the House as best I can,” Mr Marshall said.

“I have a deep respect for the institution of Parliament and the processes of democracy and will do all in my power to uphold them in the interests of the people we represent and the members who serve them.”

“I look forward to working with Adam again in his role presiding over debates, statements and questions in the Legislative Assembly Chamber, Australia’s oldest Parliament.”