MARSHALL STEPS UP CAMPAIGN FOR NEW TAFE HEADQUARTERS IN ARMIDALE 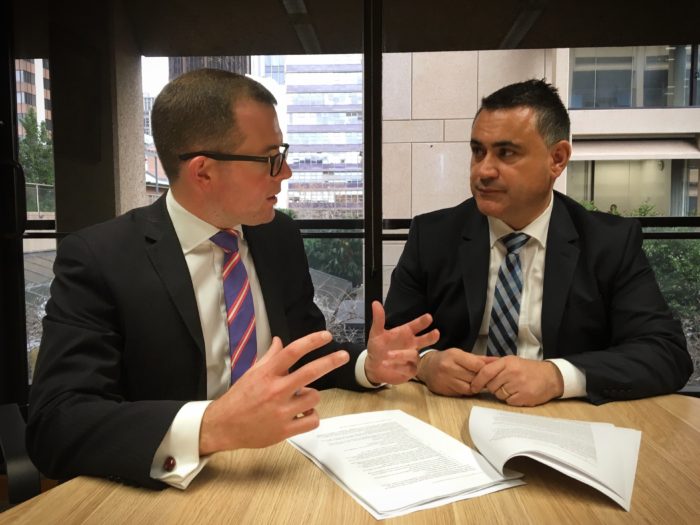 THE case for Armidale as the location for the new TAFE NSW Digital Education Headquarters was ramped up in Sydney yesterday by Northern Tablelands MP Adam Marshall.

During a sitting of Parliament yesterday, Mr Marshall again met with Regional Development Minister John Barilaro to press his months-long campaign for the new TAFE unit to be established in the Northern Tablelands.

The MP presented the Minister with letters of support from an array of local organisations supporting the move, including Armidale Regional Council and the University of New England

“I’m not the only MP campaigning to have the unit established in my electorate,” Mr Marshall said. “But I believe the case for Armidale is overwhelming.”

Mr Marshall has been advocating for greater regionalism of government services since his election in 2013. The TAFE Digital Education Headquarters were conceived as part of the government’s TAFE reforms. Mr Marshall believes the case for locating the headquarters in Armidale is irrefutably strong.

“Every house and business in Armidale is connected to the information highway by NBN’s high-speed fibre-optic cable,” he said.

“The city has arguably the best digital infrastructure of any urban centre in the country, which should be a primary criteria for deciding the location of this new unit.”

Mr Marshall believes that the future staff of TAFE Digital Education Headquarters also have much to gain by operating from a regional location.

“Armidale is a wonderfully family-friendly city,” he said. “It has the whole gamut of schools – public, private, Catholic and alternative – a renowned university and a location that provides its residents access to some of Australia’s greatest wilderness, including several World Heritage Areas.

“We are an hour’s commute from Sydney and Brisbane, via three airlines making 18 flights a day. Residents seldom have to commute more than 10-15 minutes to and from work.

“And for the city, there would be huge advantages in this move.

“Preliminary estimates suggest that the unit might have about 60 employees. In a capital city, these people would be swallowed up.

“In Armidale, they and their families would provide a terrific economic boost to local business, swell numbers in our schools, and boost the capacity of community groups.”

Federal Member for New England Barnaby Joyce has recognised Armidale’s attributes in his drive to have the Australian Pesticides and Veterinary Medicines Authority (APVMA) and its 175 employees relocated from Canberra to Armidale.

Mr Marshall urged Minister Barilaro to join the Federal Government in recognising the multi-layered advantages of regionalisation – in this case with a new department that can be built from the ground up in Armidale on purpose-built foundations.

The MP expects the Minister to determine the location of the headquarters within weeks.