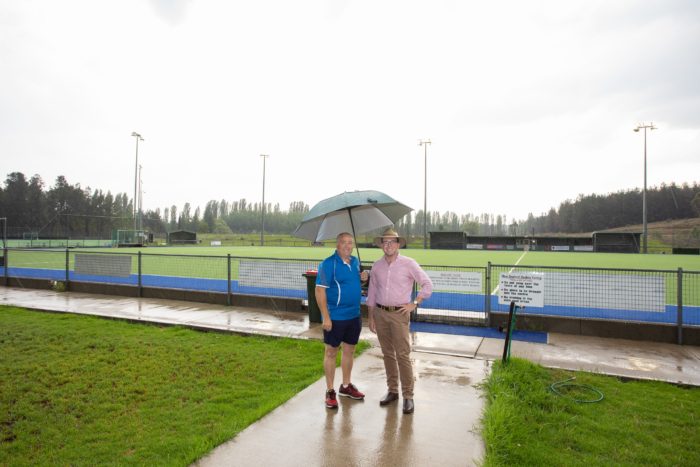 NB – This photo was taken before COVID-19 restrictions.

THE future is looking bright for Hockey New England with Northern Tablelands MP Adam Marshall today announcing a $137,000 State Government grant to upgrade lighting at its turf fields at the University of New England (UNE).

Mr Marshall said the success of the sport in Armidale had increased the need to make the fields playable day and night.

“Back in the mid 1990s, when the two turfs with their halogen lights were first built, the venue was able to cater for the number of players involved with the sport – that’s no longer the case,” Mr Marshall said.

“With more than 1,000 members, ranging from five to 75 years of age, currently associated with Hockey New England, there’s a strong need for matches and training to be scheduled at night to ensure everyone gets a chance to play.

“This funding will allow Hockey New England to replace the aged halogen lights, with state-of-the-art LEDs capable putting out 500 Lux, or the recommended light needed for professional sport.

“I’m confident with the calibre of the fields and lighting upgrades we will soon see state or even national championship hockey being played in Armidale annually.”

“The existing halogen lights are inefficient to run, they are expensive to replace and don’t provide the standard of light needed to play hockey safely at night,” Ms Whitty said.

“With a small, hard ball getting smacked around a field hockey can be a dangerous sport, especially with bad lighting.

“The LED bulbs which we have decided to use will be shipped in from the Netherlands and will provide players with a much brighter and therefore safer playing environment.

“They will also be a lot cheaper for us to run, which means more money for our organisation to reinvest into further improving our facilities and player development.

“The new lights will take about two months to arrive and will be installed and ready for play by the middle of this year.”