MARSHALL WELCOMES A BOOST IN POLICE RANKS ACROSS THE STATE 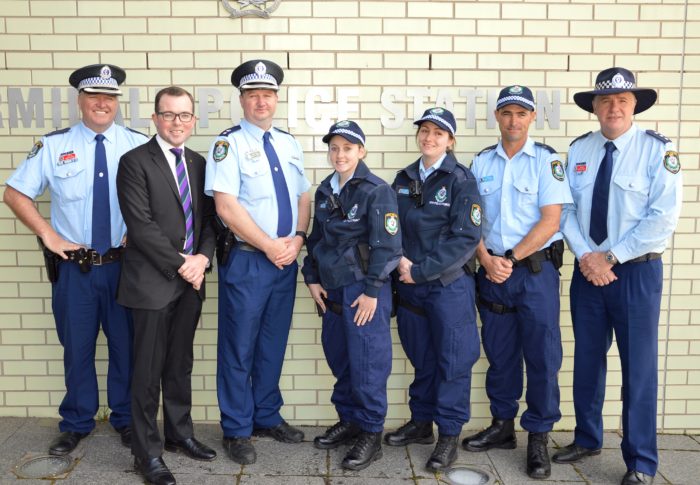 NORTHERN Tablelands MP Adam Marshall has warmly welcomed today’s announcement that 1,500 new police will be added to the NSW Police Force – the largest single increase of the thin blue line in 30 years.

“The 1,500 extra police will benefit every single community across rural and regional NSW, including ours here in the New England Police District, thanks to a record investment of $583 million by the State Government,” Mr Marshall said.

“The government has already delivered more than 1,000 new police since 2011 and these 1,500 new recruits will put more police where they are needed – out on the frontline, tackling crime across the state.

“NSW has some of the lowest crime rates in 20 years and with this boost to police numbers, our men and women in blue will be able to meet future crime challenges head on.”

Mr Marshall said the safety and security of communities across the Northern Tablelands was his highest priority and he’d been working with New England Police Commander Scott Tanner to guarantee extra boots on the ground were secured for the region.

“Police Commissioner Mick Fuller has provided the Government with a resourcing blueprint for the NSW Police Force that focuses on proactive and high visibility policing in every corner of our State,” Mr Marshall said.

“Locally, I’ll continue working closely with Commander Tanner to ensure he has the extra Police resources needed to keep every single one of our small and large communities safe and secure today and into the future.

“If we are successful, I look forward to making further more detailed announcements about extra local resources and police numbers very soon.”

Mr Marshall said protecting some of the most vulnerable members of the community – our children and the elderly – was undoubtedly one of the most important roles that NSW Police perform.

“To ensure police have greater capability to keep a watchful eye on known offenders against children and ensure our elderly are better protected from abuse, our region will receive a Child Protection Officer and Elder Abuse Prevention Officer,” Mr Marshall said.

“I am very excited at the opportunities we’ll now have to enhance our capability,” Commissioner Fuller said.

“We have re-engineered the organisation to ensure our structure has us well placed to prevent, disrupt and respond to crime throughout the community.

“Now we can also grow the Force to boost our efforts even further.”

President of the Police Association of NSW Tony King said this investment in police numbers will undoubtedly help ease the burden and strain on current officers.

“I am thrilled the Government has listened and worked with us to deliver the biggest increase in police numbers in more than three decades,” Mr King said.