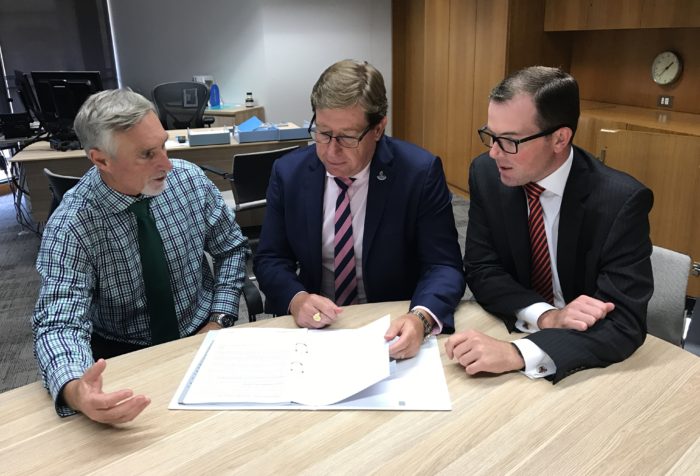 THE campaign for a new 24-hour police station in Inverell was ramped up last week with a meeting in Parliament House between Northern Tablelands MP Adam Marshall, Inverell Mayor Paul Harmon and Police Minister Troy Grant aimed at pushing the project along.

Mr Marshall said that since the Minister’s inspection of the station last year there had been some progress.

“Late last year surveyors from the NSW Police properties unit were on site to scope out the site and extent of the works required,” he said.

“We were told that a business case was currently being developed by NSW Police for a new station, which will be submitted to the Minister.”

Mr Marshall said Inverell was a bourgeoning regional centre with a fast growing population that needs a larger and modern-day justice precinct. He said the Inverell police station was the by far the oldest of the three 24-hour police stations in the Northern Tablelands electorate.

“The station has served the community well over the past 56 years, but its current cramped and inadequate conditions mean that the time is ripe for a new station to be built that will provide a modern and professional building for our local police force to continue serving the community,” Mr Marshall said.

“The station was built in 1960 to accommodate 14 police officers and today 46 officers work in those same conditions, providing 24-hour protection for the community.

“The station is literally overflowing to the point that many of the general duties officers, the rural crime squad and detectives are working out of the three police residences that are located near the station.”

Mr Marshall has previously toured through the station with Inspector Rowan O’Brien and Mayor Paul Harmon to see the situation for himself.

“The station only one formal interview room, which means that local detectives and general duties officers cannot take statements from witnesses or an accused in a timely manner because only one interview can be conducted at a time,” he said.

“The evidence room also is too small and there is also an insufficient number of cells at the station to separately hold suspects and offenders, particularly when the local court is sitting.”

Mr Marshall said Inverell’s station stood out as a facility that is in need of replacement.

“The other communities served by 24-hour stations in the electorate have all recently had them replaced – Armidale in 2007 and Moree two years ago – so with a station over 55 years old, not built for 24-hour policing and not with enough room for the current, let alone future police force, I believe we have a very strong case for a new station in Inverell,” he said.

“Now is the time for a larger and more modern station to be provided to meet the community’s policing needs—not just now, but for the next 50 years as the community continues to grow and the police contingent at the station continues to increase.”

Mr Marshall said the meeting with Minister Grant was “very positive” and that he hoped the business case would be finalised by NSW Police shortly.

“The sooner the business case is completed, the sooner the community and I can put the pressure on the government to fund the new station,” he said.