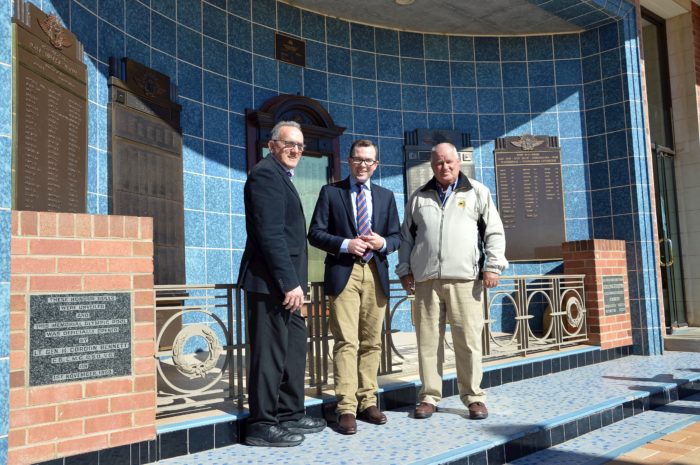 THE Inverell War Memorial will have undergo a minor refresh with $3,500 in State Government funding set to give the old tile steps at the front of the memorial pool a facelift, Northern Tablelands MP Adam Marshall has announced.

“The Inverell War Memorial is a unique place of commemoration being attached to the pool which is a community facility in year-round use,” Mr Marshall said.

“It’s in great condition despite being in such a public place thanks to the efforts of Council and the RSL, but the tiles in front of the memorial date back to the 1950s and are overdue for a facelift.

“The step and tiles will be replaced and will complement the existing colour scheme, as well as the newer granite monument that went up a few years ago thanks to money from this same funding scheme.

“The continued work and maintenance of council and the local RSL sub-branch ensures this memorial will be a place of remembrance and reflection for decades to come and I congratulate both parties on their continued efforts to keep the Memorial in wonderful condition.”

The Community War Memorials Fund is part of an extensive program of work happening right through the Centenary of ANZAC, including the $40 million upgrade of the ANZAC Memorial in Hyde Park.

Almost $130,000 is being invested in 2018 by the State Government into updating, restoring and maintaining memorials around NSW.