MINISTER GETS FIRST HAND LOOK AT NSW BUSINESS OF THE YEAR 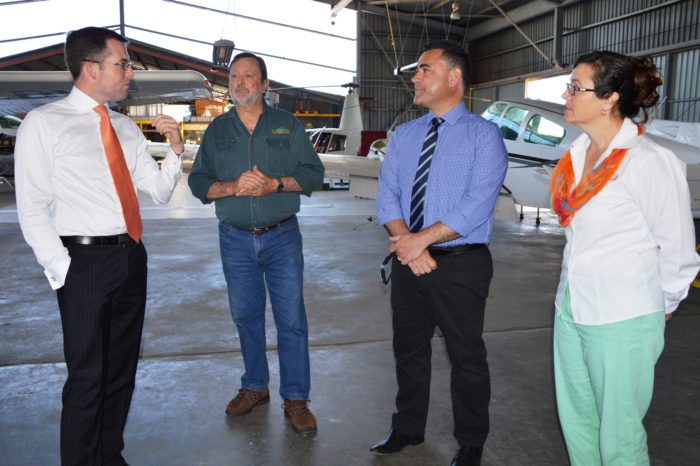 WHILE on tour through the Northern Tablelands today, Minister for Small Business and Regional Tourism John Barilaro joined local MP Adam Marshall on a visit to Superair, the Armidale aircraft and helicopter maintenance business which was named the NSW Business Chamber’s Business of the Year late last year.

Mr Marshall said it was a remarkable feat for a small regional operation and an excellent example of what can be achieved by resourceful entrepreneurs.

“Super Air won the award only three months after being named Armidale’s Business of the Year so it’s an impressive effort and well deserved,” Mr Marshall said.

“The business was started by a group of graziers 50 years ago to apply superphosphate throughout the New England by air.

“However when faced with challenging drought conditions which were impacting heavily on the demand for aerial topdressing, Super Air made a smart commercial decision and moved into aircraft maintenance and engineering services in Armidale, Tamworth, Glen Innes and Scone.

“Superair’s highly-skilled engineers now service specialised aircraft from all across Australia and as a result, in just two years, the company has seen its turnover surge by 27 per cent – an impressive achievement.”

Mr Barilaro said he was very impressed by the business and its long-serving staff, who have been at the forefront of innovation and change in their sector.

“Superair is one of the best examples I know of in regional NSW of a business that has not only embraced change in its industry but been at the forefront of changing the way others in the industry do business,” Mr Barilaro said.

“The work that’s being done right here in Armidale is incredible and I can now understand why Superair took out the statewide award.”