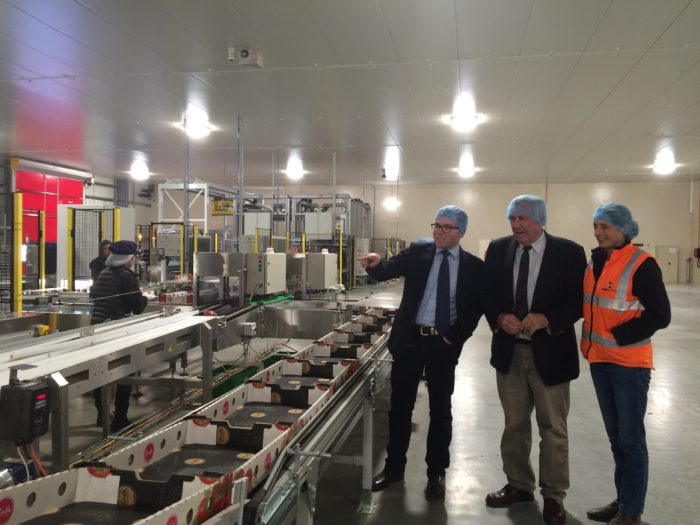 NORTHERN Tablelands MP Adam Marshall hosted Minister for Roads and Freight Duncan Gay on a visit to the newest site of the huge Costa tomato production concern at Guyra yesterday.

The pair toured the $60 million tomato growing glasshouse complex on the northern side of Guyra which was opened just over a year ago.

The 10 hectare complex produced its first crop late last year and freights out produce in up to nine trucks daily to markets in Brisbane, Sydney and Melbourne, in the peak season.

“With around 600 staff, the Costa Group is one of the largest employers in our region and the expanded investment in their Guyra operations over the past two years has been significant for them and also for the local economy,” Mr Marshall said.

“Costa has 30 hectares of glasshouse capacity in Guyra, producing truss and snacking tomatoes for the biggest supermarket chains in this country. It

“It was great to have the minister see for himself just what a great rural and regional industry player and big investor is achieving. The new glasshouse has over 10 hectares of growing area which is equivalent to the size of four Aussie Rules football fields and that’s an awesome sight for anyone to see on site.”

“It was also terrific for Minister Gay to meet and talk with Costa executives, like Bryony Hacket, so he could get a sense of the magnitude of freighting the tomato crop from Guyra to their markets along the Eastern seaboard.

“The new site produces around 2.5 million kilograms of tomatoes a year.

“There are of course some transport challenges associated with those logistics and the Minister was keen to hear of those and the impacts they have on the company and its plans for further and future expansion and consolidation of markets and their huge investment in this region.”

Costa supplies tomatoes under the Blush brand and a range of supermarket private label brands and the Guyra complex is one of the largest and most advanced glasshouse facilities in Australia.

Mr Marshall said the tour also provided an update on consumer and production trends when it comes to the tomato itself and buying habits.

He said it appeared that tomato lovers were increasingly looking for pre-packaged tomatoes – and smaller is bigger when it comes to sales, notably for little toms and bite-sized varieties that go greater in salads and on the table.