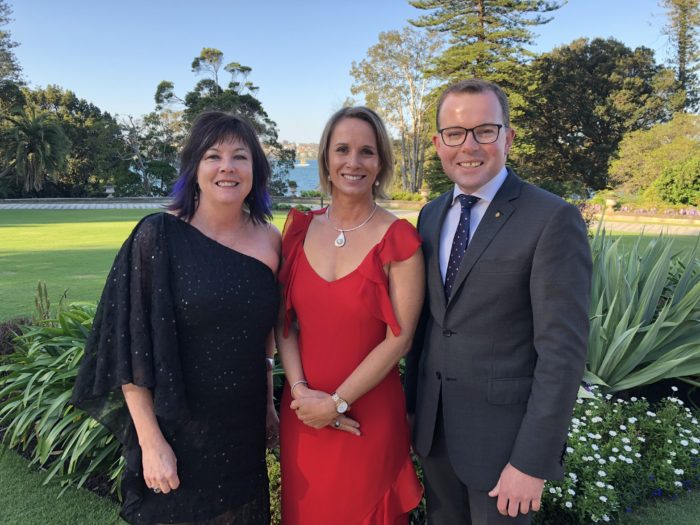 NORTHERN Tablelands MP Adam Marshall has praised the efforts of local award winners from the Moree campus of TAFE NSW who have been acknowledged for their achievements at the prestigious statewide Gili Awards in Sydney yesterday.

Mr Marshall, who is also the Minister responsible for TAFE NSW, congratulated Elizabeth Von Gavel and former Boggabilla student Falau Paul Talbot, as well as the Moree TAFE and Wee Waa Aboriginal Lands Council who were recognised for their education and training achievements.

Also recognised at the awards ceremony was Apprentice of the Year Folau Paul Talbot, who moved from Boggabilla to study at TAFE NSW in Sydney.

“Lizzie’s career in Vocational Education and Training (VET) commenced in 2003 as a Visual Arts Teacher in Moree,” Mr Marshall said.

“In addition to leading training delivery across the West Region, one of Lizzie’s greatest achievements is the planning, development and coordination of the Mehi Art Studio and Gallery at TAFE NSW Moree.

“The gallery provides Aboriginal students the opportunity to showcase their art, and teaches them important business and life skills.”

As part of her commitment to partnership, Lizzie employs Aboriginal teachers to deliver a range of courses incorporating the local Gamilaroi language into some of the art courses.

“In developing her classroom tools and delivery programs, Lizzie consults with the local Aboriginal community and Elders to ensure her teaching practices and resources are culturally appropriate,” he said.

And Mr Marshall said the naming of Folau Paul Talbot was a fitting acknowledgement of a proud Gamilaroi man from Boggabilla, the first in his family to complete Year 12 and go on to even more statewide honours.

“Paul is quite the hero of his hometown now and it is so well deserved,” Mr Marshall said.

“After that, he went on to complete his Certificate IV in Dental Assisting in Oral Health and Radiography but he has also completed his Diploma in Dental Technology.

“Paul now works as a Scholarship Mentor with POCHE Centre for Indigenous Health at Sydney University, mentoring and organising the scholarships for all the new dental scholars in the program.

“His outstanding results and his continued commitment and contribution to the community has resulted in him also winning the Apprentice of the Year at this year’s NAIDOC Awards.”

Mr Marshall said the awards recipients were a testament to the real and significant change that training provided by TAFE NSW brings to the lives of Aboriginal people across NSW.

“It is providing pathways for Aboriginal students into further study and satisfying careers and bringing benefits to many regional areas,” he said.

“The Gili Awards help demonstrate the power of vocational education and training to provide life-changing pathways to sustainable employment or further study for Aboriginal people.”

“TAFE NSW is to be congratulated for their continuous efforts in creating programs to engage students and build capability within Aboriginal communities across the State.”

Mr Marshall said Gili was an Eora word that means ‘to shine’ and this year’s recipients had all embraced the spirit of these awards through their hard work, talent and ambition.