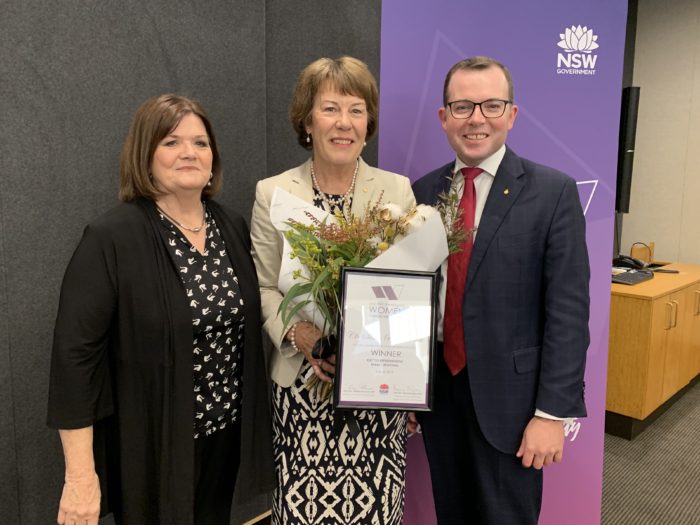 FOR more than 30 years Mungindi community stalwart Sue Price OAM has fought for her community and now the Moree Plains Shire Councillor’s work has again been publicly recognised, with a NSW Minister’s Award for Women in Local Government

Cr Price received the Elected Representative Regional NSW Woman of the Year Award from Minister for Local Government Shelly Hancock during a ceremony today at Parliament House in Sydney.

Member for Northern Tablelands Adam Marshall was on hand to help present the award to Cr Price and congratulated her on her lifelong dedication to the Mungindi community.

“No matter how large the struggle, Sue Price is someone who has never given up,” Mr Marshall said.

“Over her career she has fought to ensure families in rural and remote communities have access to the same level of services as those in larger towns and I think everyone recognises what Sue has achieved,” Mr Marshall said.

Cr Price was first elected to Moree Plains Shire Council in 2008 after retiring from a career in teaching and in that year she was also made Deputy Mayor, a position she held until 2016.

“I have always admired Sue’s drive to improve conditions in the more isolated areas of the Moree Plains Shire and it was largely through her efforts the State Government coughed up $14 million to seal Carrigan Road between Mungindi and Boomi,” Mr Marshall said.

“Sue has shown a women living in a rural area can be heard, can have a voice and can make a huge difference and I think she is a true role model for women across our region.

“I am so proud of Sue and everything she has advocated for and achieved in her time on council. She is thoroughly deserving of this award and recognition.”