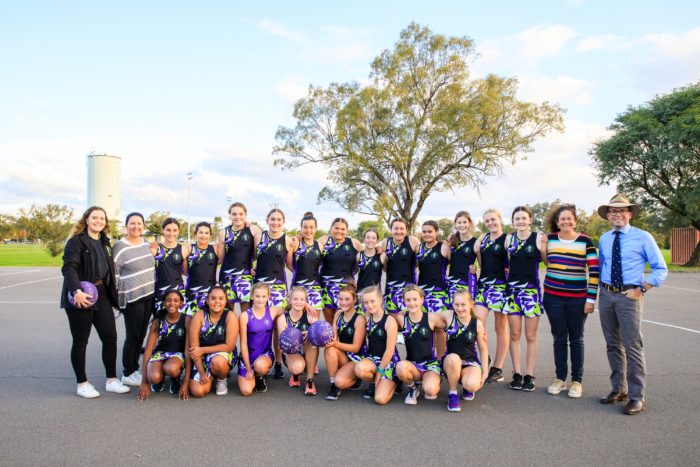 A $10,000 State Government grant has given Moree and District Netball Association the attack power it needs to make its mark on the NSW Titles in Sydney, with two representative sides recently participating in a competition and team bonding weekend at Dubbo.

Northern Tablelands MP Adam Marshall announced the funding last week while catching up with the Under 12 years and Under 13/14 years teams, who have been training three times a week, ahead of the State Titles next month.

“MDNA is in the process of rebuilding its representative ranks and has been exploring ways it can remove the barriers which restrict participation,” Mr Marshall said.

“One initiative last month was to use a netball carnival to Dubbo as a teambuilding exercise for players and their families, with this grant subsidising the cost of hiring a bus, accommodation and a visit to Western Plains Zoo.

“This is the second consecutive year Moree Netball has been able to pull together junior representative teams, with families in the past struggling to afford the costs associated with playing sport in a more far-flung part of the State.

“We all know the social and health benefits sport can play in the development of our youth, and I want to recognise Moree Netball on the way it has looked outside the box to encourage and support more young women to get on the court.

“I wish all players, coaches and support staff the best of luck in Sydney and am confident Moree will be competitive on the big stage.”

“On the bus trip home, I asked all players and parents to write their favourite part of the weekend, most responses were around spending time together as a team and club,” Ms Chaplin said.

“Just the process of having everyone together on one bus for four hours, singing and relationship building, did wonders to boosting moral and comradery amongst players.

“Our hope is to be able to continue to offer locals the same opportunities as city players. We believe by creating memories, like team weekends away, we will promote and encourage others to play and try out for representative netball, in years to come.”