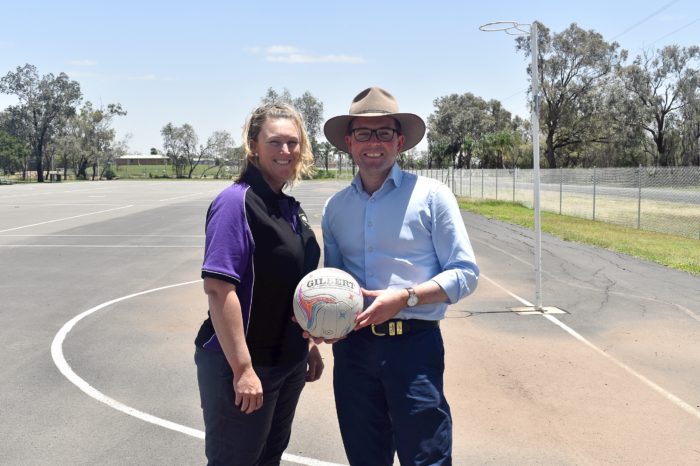 Mr Marshall gave the good news to the netball association last week and said the funding would help cover the cost for up to four netball teams to travel to Sydney for the state titles.

Moree and District Netball grants officer, player and umpire Dimity Hook said the funding support was big news for the small club, but one that is attracting more and more juniors to the sport.

“It’s fantastic news and it will allow us to get bus travel to Sydney and pay the registration into the State Age competition,” Mrs Hook said.

“We will now hope to take four team if we can get the players, about 40 girls between the ages of 12 and 17. It will be great for them; it will allow them to get that exposure of a larger competition.

“I think Moree sent one team a few years back but we’ve always struggled to cover the cost of going because many parents couldn’t afford to fully fund the cost.

“Now this will pay for the travel and registration and we will be hoping to find some subsidised accommodation so as many girls as we can get can actually take part.”

Mr Marshall said the opportunity to compete in the state titles was something many young players looked for.

“There’s some very talented children playing netball and they deserve the chance to play on a bigger stage to improve their skills,” Mr Marshall said.

“Netball in Moree is increasing in size and support; they’ve found something like 130 new members this year, there’s about 330 club members now.”

Mrs Hook said the strength of the club could be attributed to new and upgraded facilities, including a new canteen and toilets at the netball grounds.

“We have some eight junior netball teams playing on Saturdays and there’s about 50 children between four and 10 years old who take part in the learning to play sessions,” she said.

Mr Marshall said a huge $1.5 million funding boost announced in October this year for the Ron Harborne Sporting Precinct in Moree, where netball is played, was also adding to the renewed interest in the sport.

“That funding will significantly expand the existing facilities there, but also coupled with another major monetary boost of $393,750 for a night lighting system, will power charge the precinct for many sports, including netball,” Mr Marshall said.

“The infrastructure we are going to see at Ron Harborne will be first class stuff and give local sportspeople real quality facilities.

“The additional funding for a lighting upgrade is particularly great news for netball because it gives them the capacity to increase the competitions they can run, for both junior, adults and mixed sides in twilight and evening sessions of play.”

Mrs Hook said the lighting project was “brilliant” news for netball in Moree and would drive plans to have weeknight as well as weekend play expanded to cater for increasing player numbers and calls for additional comps.