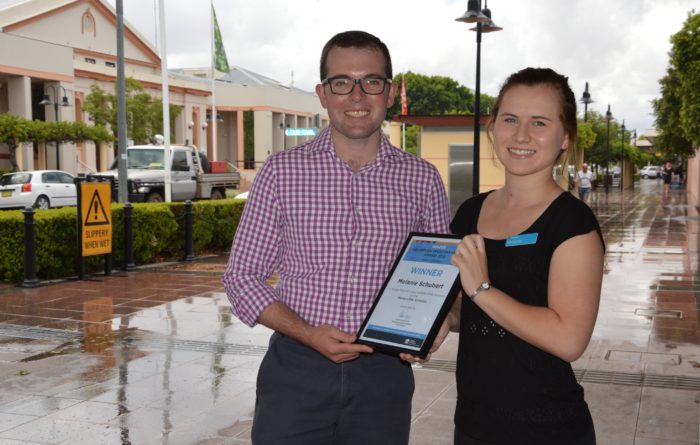 Mr Marshall recently congratulated the 17 year-old athlete in Moree, presenting her with a certificate recognising Melanie’s commitment to her sport and fellow club members.

The MP said he was amazed by the Melanie’s accomplishments and impressed by her mature attitude and willingness to give so much back to the sport she loves.

“Melanie is an incredibly committed young woman, who has been eager to contribute and assist in the running of Little Athletics in Moree,” Mr Marshall said.

“She has always been willing to step into any role to help, including coaching and assistant coaching, acting as age group manager and performing administrative tasks as well as taking on canteen duty.

“Melanie is a registered player and on many occasions has forgone her own training and event sessions to help out in varying roles when there are insufficient parent helpers.

“She is a wonderful role model to the younger members of the club and has a great rapport with them all. I wish her every success for the future.”

Mr Marshall said the State Government award was a fantastic achievement and one that recognised Melanie’s contribution to little athletics and her community.

Moree Little Athletics President Karen Schubert said the club was very proud of Melanie and appreciative of her selfless contribution to athletes over the years.

“We’re all very proud of Melanie – she’s a compassionate person who has given so much to the club,” Mrs Schubert said.

“Melanie is going away this year to study at university in Armidale and she will be greatly missed by all club members.”