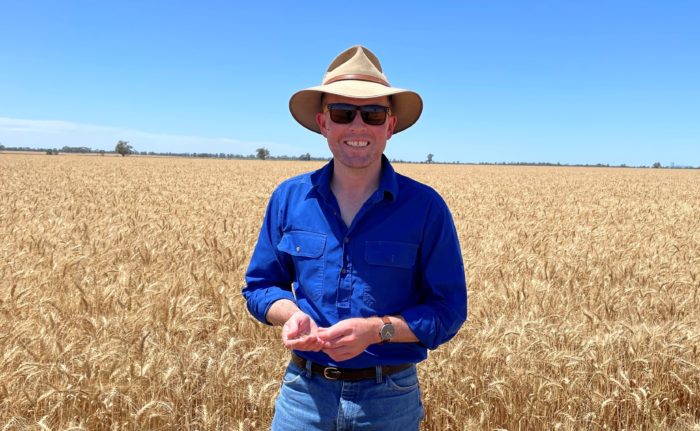 Member for Northern Tablelands Adam Marshall wants to see the State Government remove the bureaucratic shackles from the Port of Newcastle to allow the region’s primary producers to export their grain from the port, saving tens of millions of dollars each year in freight costs.

AN industry push to establish the Port of Newcastle as a leading NSW grain export and receivable terminal has received the full support of Member for Northern Tablelands Adam Marshall, who wants a new container terminal constructed to slash rail freight costs and grow profits for producers in northern NSW.

Mr Marshall said he would be lobbying to have the deeds that govern the operation of the privatised Port of Newcastle changed by the State Government to facilitate the millions of dollars of private investment, which is ready to start constructing a new deep port.

“Our grain growers have a gateway to world markets on their doorstep, but unfair bureaucracy and now redundant rules are keeping the door to Port of Newcastle locked and bolted,” Mr Marshall said.

“Currently Port Commitment Deeds (PCD), which were signed when Port Kembla and Port Botany were privatised by the State Government in 2013, require the State to compensate those two ports if container traffic at the Port of Newcastle exceeds a cap.

“When the Port of Newcastle was privatised in 2014, another PCD required that port’s operators to reimburse the State Government for any compensation paid to the operators of Kembla and Botany.

“These provisions have made establishing a container terminal and increasing capacity at the Port of Newcastle financially unviable for the owners – and our grain growers are paying the price.

“There has recently been a failed attempt to have these provisions challenged in the Federal Court as anti-competitive.

“It is my view that legislators must re-look at the PCDs and create an environment which, at least, removes the reimbursement provisions so the Port of Newcastle can operate in a freer market.

“This would allow the port to pursue expansion plans, without being burdened by ridiculous compensation requirements.”

Mr Marshall said the establishment of a container terminal at Port of Newcastle would go hand-in-glove with the upcoming Moree Special Activation Precinct and freight hub.

“If a key purpose of the SAP is to streamline agricultural freight out of the North West, then it stands to reason steps should be taken to increase access to the most immediate international shipping port,” he said.

“Establishing a container terminal at Port of Newcastle has the potential of cutting the cost of grain rail freight by $16 to $22 per tonne – putting huge dollars back in the pockets of growers and the local economy.

“While there are grain facilities at Newcastle, a container terminal would increase the amount of grain which can be received and stored during record harvests, reducing the need to move product to the far-off Port Kembla at Wollongong.

“The Port of Newcastle has preliminary designs for the multi-purpose deep-water terminal at Mayfield and the money to proceed, it now needs the legislative framework to make it happen.

“I fully support the campaign to have the Port of Newcastle released from its shackles and allowed to operate in a more fair and equitable way, which subsequently leads to better results for our farmers and our region.”