MP CALLS FOR AN END TO FLY IN-FLY OUT JUSTICE: JUDGES FOR THE BUSH 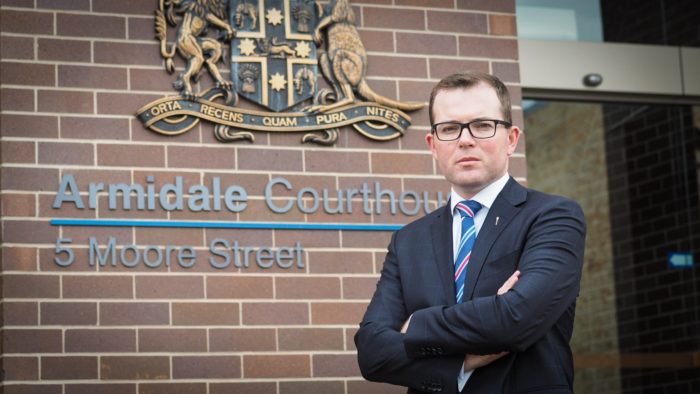 DISTRICT Court judges will be forced to live in the regions in which they preside under a bold new initiative announced today by Northern Tablelands MP Adam Marshall.

Mr Marshall said that currently there were only two judges based outside of Newcastle, Sydney and Wollongong – in Lismore and Dubbo – and that ‘fly in-fly out justice’ was not ideal for country communities.

“For all other district courts across the state, judges are flown in from Sydney, accommodated in motels and then flown back to Sydney at the end of the week,” he said.

“This sort of delivery of justice is needlessly expensive, inefficient and results in decisions which are out of step with community expectations,” he said.

“I’m calling for Judges for the Bush to be implemented which would see six judges placed in regions where there is ample workload to justify a full-time judge.”

Under Mr Marshall’s plan, one of those six new country-based judges would reside in the New England, at either Armidale or Tamworth, to service the Armidale, Tamworth and Moree district court circuit.

District courts in those three towns alone collectively sit for more than 70 weeks a year with Sydney-based judges rotating on circuit.

“There is more than adequate work in our region for at least one permanent presiding judge, who could be supported by a colleague from Sydney for civil matters or any overflows,” Mr Marshall said.

Armidale’s District Court has 37 sitting weeks, Tamworth has 32 and Moree four sitting weeks, although in recent times those schedules have been expanded to address significant case backlogs.

Mr Marshall argues having more resident judges could also see greater flexibility in the scheduling of district court and an opportunity to substantially reduce court case and sentencing delays.

“Ultimately, I believe it will result in better decisions from the bench because judges are going to better understand the problems that are facing New England communities, like ice or domestic violence or that alcohol-related violence is out of control in some areas,” he said.

You won’t have judges bringing a mindset of Sydney because our communities are not the Northern Beaches or the Inner West, where they come from and that’s the prism through which they make decisions

Other locations which would see resident judges appointed under the initiative would be Orange, Port Macquarie, Taree, Coffs Harbour and Wagga Wagga.

“They will live in the region which has to deal with the implications of their decisions on the bench, and their rulings will be better informed by community expectations.”

Mr Marshall has raised Judges for the Bush with his colleagues and the NSW Attorney General, who is considering the scheme.