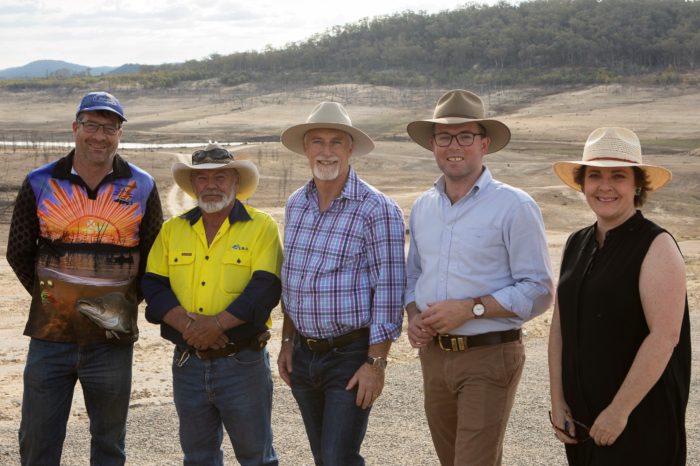 NORTHERN Tablelands MP Adam Marshall has stepped up his campaign to redevelop and improve Copeton Dam’s Northern Foreshore, casting a line to catch $5 million from the State Government to bring extra visitors and dollars to Inverell.

Mr Marshall met with Inverell Shire Mayor Paul Harmon, Copeton Dam Northern Foreshore caretaker Tom Stapleton and representatives from the Inverell RSM Fishing Club last weekend to update them on efforts to secure the ambitious multi-million-dollar plan, which is currently being considered by the government.

“This is a once in a lifetime opportunity to unlock the full potential of Copeton Dam and attract more tourists than ever before,” Mr Marshall said.

“The Northern Foreshore has long been the Copeton’s best kept secret, however, over the last four years it has seen an explosion in patronage with visitation up by almost 400 per cent.

“Copeton is famous for its open Murray Cod season and attracts thousands of people from right across Australia and from overseas to try their luck.

“Under the exciting plans, a new clubhouse will also be constructed to cater for groups and the existing boat ramps will be extended, as will the bitumen access roads to the, to ensure safe and Reasy access for boats into Copeton no matter the water level.”

“I commend Council for the work it’s done to consult the community on what facilities to upgrade and put together a brilliant plan.

Mr Marshall added the upgrades would provide a significant boost to the local economy.

“This project is expected to inject a further $4 million into local businesses a year with the extra visitors the redevelopment will attract,” he said.

“If the redevelopment is funded it will be a huge win for our entire area with town’s like Bundarra, Bingara and Warialda also benefitting from the through traffic as tourists head to Copeton to try their luck in landing a giant Murray Cod.

“Our region is crying out for more holiday destinations which are close to home, affordable for families and accessible to people of all abilities.

“The Northern Foreshore Upgrade aims to do just that by widening the demographic of visitors who can access the iconic facility.

“I’ll be doing everything I can to secure the funding and reel in millions of dollars of extra and valuable tourist dollars for Inverell each year.”