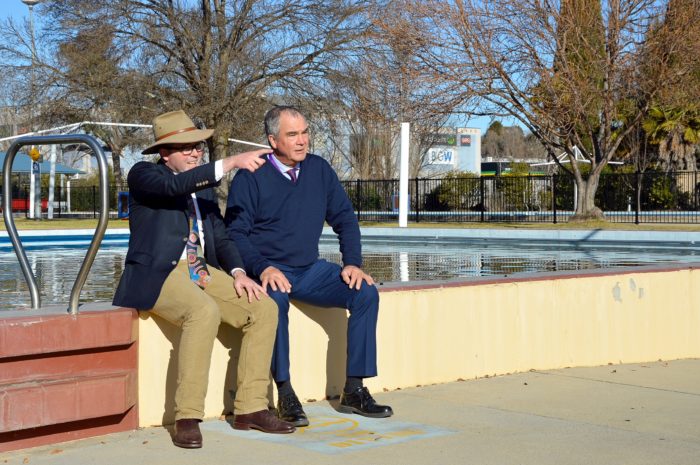 NORTHERN Tablelands MP Adam Marshall has dived into the big end of a public push to get funding for a new hydrotherapy pool for Armidale.

Mr Marshall has thrown his weight behind the ambitious plan, asking the State Government to contribute just over $1 million for a new pool to be built at the city’s Monckton Aquatic Centre.

Mr Marshall said securing a new location and a new pool had been on his priority list since the near closure and problems associated with the old 40-year-old hydrotherapy pool at the Armidale Hospital location over the past two years.

“There’s no hiding the need for a new hydro pool and this decision by Armidale Regional Council to apply for funding for it is a great solution for that plan,” Mr Marshall said.

“The woes of Armidale’s hydro pool facility have been ongoing for years. The ageing facility was resuscitated from a premature death in 2017 thanks to the efforts of volunteers, community members, the council and with a fair bit of push-and-shove from me on behalf of all the stakeholders.

“The Hydro Pool is integral to Armidale’s health infrastructure and forms the basis of many health plans for the elderly, the disabled and those undergoing rehabilitation.

“Last year we dragged Hunter New England Health to the table on this issue and saved the pool, with it reopening in July 2017. But even then, it was a temporary measure and to ensure the future of the facility, we needed a long term solution.”

Mr Marshall helped convene a working party to find a solution in August last year, and along with Armidale Regional Council’s Lindsay Woodland, Jenny Bailey and representatives from the Lions Club and Hunter New England Health, they set a 12 month time frame to work on a permanent solution.

“Now, Armidale Regional Council has taken the issue by the horns and I’m delighted to support their plan for a $1.5 million facility to be located at the Monckton Aquatic Centre,” he said.

Mr Marshall said the plan was to build a stand-alone facility that would be run by council and co-locating the hydrotherapy pool near other pool facilities made operational sense.

“It means that other community groups would have greater access to the facility, supporting the cost of running the pool,” Mr Marshall said. “This includes groups such as junior swim clubs, aqua-aerobics for older residents and those rehabilitating from sport injuries and special needs groups.

“A more user-friendly hydro pool is key to its ongoing success and is the model used by the Tamworth hydro pool.”

Mr Marshall said community groups had backed the proposal, including him, and he was determined to secure the funding.

“I commend Armidale Regional Council for being proactive and not waiting for the current facility to finally hit a terminal issue – be it a filter, or a lack of backing from the Local Health District,” Mr Marshall said.

“The 162 square metre indoor heated facility will be built to modern standards – it will be safe, accessible and most importantly – a community asset.

“I’m determined to get the cheque sign, sealed and delivered.”

Mr Marshall said the council was seeking $1,093,196 towards the project cost of $1.458 million under the NSW Government’s Stronger Country Communities Funding program.

Mr Marshall said Hunter New England Health had indicated previously that once the current hydro pool was deemed irreparable, it would not be replaced because it was not a core requirement of public health services.

“Well, I maintain it is a core business for the community, and putting a new pool into the hands of the community through the Council, is the way forward to deliver that facility for the people of Armidale and region,” Mr Marshall said.

The Monckton Aquatic Centre in Dumaresq St consists of one eight-land 50m competition pool and grandstand, one six-lane 50 metre pool, a learner’s pool and a toddler’s pool.