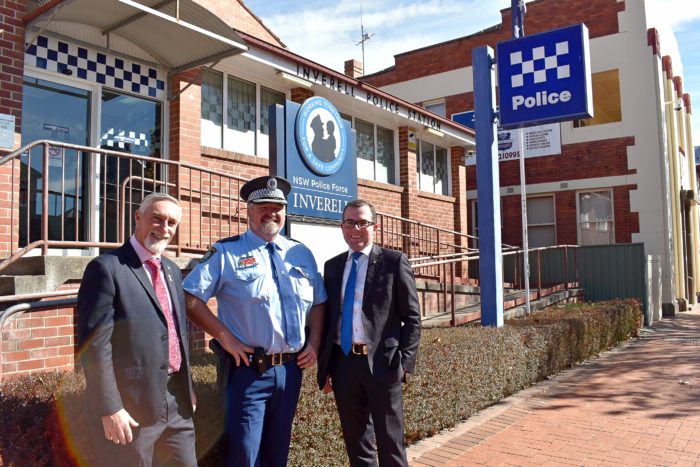 NORTHERN Tablelands MP Adam Marshall threw open the doors of the Inverell Police Station this morning to media in a ‘take-no-prisoners’ campaign to force the funding of a complete rebuild of the station in the upcoming 2018-19 NSW Budget.

Mr Marshall said the open inspection, alongside Inverell Mayor Paul Harmon, was designed to highlight to the wider public just how completely inadequate the decrepit building is now for policing in the modern era.

It is the latest shot in Mr Marshall’s political fight to get a new 24-hour Inverell Police Station and he was joined by Chief Inspector Rowan O’Brien, the officer in charge of the station, to host the open house.

It follows Mr Marshall’s address to State Parliament last week, putting further pressure on the government to fund the complete knock down and rebuild as a matter of urgency.

Addressing the Legislative Assembly, Mr Marshall detailed how the 58-year-old out-dated and inefficient station was inappropriate for the law and order demands of the growing Inverell district.

“There are 46 fulltime police and staff currently crammed into the station, which was built in 1960, when Inverell was less than half the size it is today and had only 14 police working in the same space.

“There’s also a police boat and 13 vehicles, that sit out in the open due to a lack of storage space onsite.”

“We are going to need more officers working at Inverell’s 24-hour police station in the coming years and they simply won’t fit. The current station is already literally overflowing and cannot cope.

“The need for a new home for Inverell police is obvious to anyone who lives in the community or who has ever visited the station, and today’s event should show everyone who hasn’t been there, just exactly how bad things are.

“At the last Australian Bureau of Statistics estimates the shire had a population of 16,780, showing growth of 1.8 per cent since the last census taken in 2016. It is a community that is growing. As it continues to grow, it will require more police resources, which will require a new station.

“It is nearly 60 years old, but more important than its age is that policing has changed dramatically in that time and its demands are not matched by the antiquated facilities.”

The local MP’s campaign for a new police station goes back to 2015, when he first called for the Inverell Police Station to be rebuilt.

“Many of the same issues I raised back then have only been temporarily alleviated or have escalated,” Mr Marshall said.

“There is still only one interview room, a make-shift female locker room, the muster room is too small and people giving statements have to be walked past officers’ desks.

He also hosted Deputy Premier John Barilaro on a visit last October just after an allocation of $250,000 was provided to undertake some urgent repairs to ensure the station complies with work health safety requirements.

“But that was just a short term fix – a band aid applied over the top of many other old band aids,” Mr Marshall said.

“We need a knock-down and rebuild with a larger and more modern station to service the needs of the Inverell community for the next few decades.”

Mr Marshall will re-double his efforts to ensure funding is allocated by the government for the new station. He will not be going away.

“I’ve said it before and I say it again, I’m not going to let up on this one,” he said. “I’ll keep arguing the case and lobbying government until we get our new station.