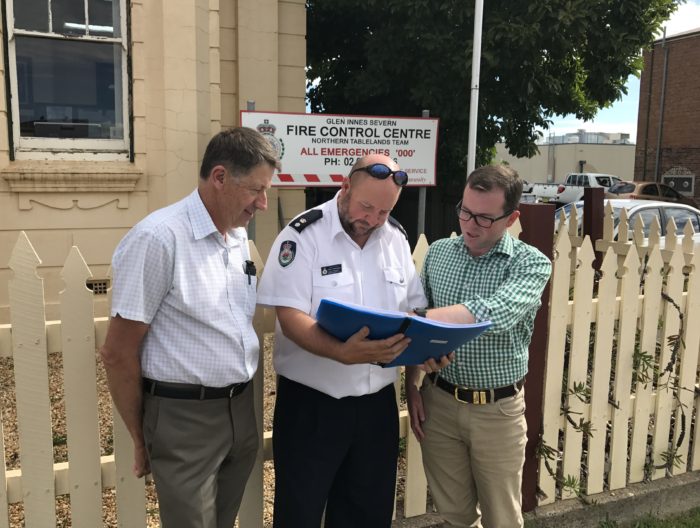 Mr Marshall wants to speed up a final decision on the design options and funding so a start can be made to upgrade fire fighting capability and extend the space for staff based in Glen Innes.

Mr Marshall said the current premises are woefully inadequate for any major fire fighting emergencies in the region and he wants the government and RFS headquarters to sign off on planned new upgrades to the Glen operational base.

The RFS has been operating out of the old original Severn Shire council chambers in Bourke Street but Mr Marshall says it’s a small space that can’t accommodate staff and volunteers efficiently and is outdated when it comes to modern fire fighting.

Mr Marshall has been lobbying the NSW Government to fund construction of a new purpose-built fire control centre for the zone.

His discussions with Mayor Toms and Superintendent Wallbridge considered the options that have already been canvassed in pre-planning for an upgraded control centre and base and the two men repeated their concerns for a decision and go-ahead sooner rather than later.

“Those talks reiterated the need and support for a push to get things moving quickly and that’s the message I’m taking to the Minister for Emergency Services David Elliott and NSW RFS management,” Mr Marshall said.

“Mayor Steve Toms has told me the council has budgeted for a start on a new facility and they’re 100 per cent behind this project, not just for the jobs it will create but for the services they will provide and the sense of security and safety it will afford for landowners and residents in the event of bushfires.

“We know the RFS has allocated preliminary funding for a new fire control facility and that they’ve budgeted for a start on the project this year – but we need to get moving now.

“There’s been a number of options canvassed in preliminary project planning, including new greenfield sites but both the mayor and I support a proposal that the best option is to locate that on an existing commercial development site in Lambeth Street which has potential in the future to extend its space.

“This option would involve modifying those commercial structures to house the fire control centre and support services and later on in another stage, the construction of a new Glen Innes Rural Fire Brigade station at the same site.”

Cr Toms has described the Lambeth Street modification option as the best on the table and one he supports for a number of reasons.

“The bottom line is this option has strong moral and financial support. There’s a need and a demand for a new control centre and operations base. The available facilities are totally inadequate and our council is hoping we can resolve this matter now,” Mr Toms said.

“The council has reaffirmed its support; we also understand the implications of our responsibility for a 11.7 per cent building cost and depreciation financial line item.

“The RFS base here needs urgent upgrading and Glen Innes is central to bushfire management in this upper Northern Tablelands area; we’re centrally located for a zone that extends to Inverell and Tenterfield.”