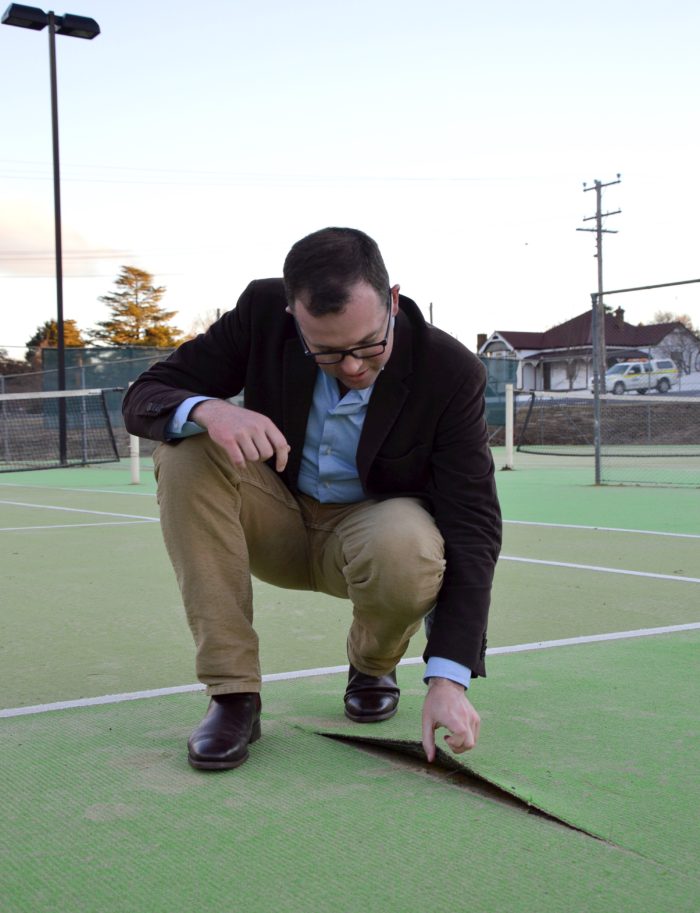 MEMBER for Northern Tablelands Adam Marshall has the Glen Innes Tennis courts firmly in his sights, with the local MP announcing he is requesting the NSW Government find $56,530 to resurface the final two synthetic courts, which desperately need replacing.

“There is no comparison between the quality of the two newer court surfaces and the older southern courts. The surface is so worn away that the lines now represent a tripping hazard as they stick out above the rest of the surface.

“In places the court is worn through to the concrete underneath and the old synthetic court is shredding beneath peoples feet – I was able to quite literally lift the surface with my fingers. The surface is also slippery when damp.

“The old southern courts are now so unsafe that the Club, coaches and players avoid them altogether.

“This is an unacceptable situation for a thriving Club and I’m determined to secure the $56,530 needed to get the upgrades underway.”

Mr Marshall said quality venues were key to local clubs continuing to grow and attract new players. Glen Innes has a particularly strong sporting precinct that includes the courts, the pool and the netball and football facilities.

“Completing the resurfacing of the two southern courts will give Glen Innes four sand filled artificial grass over courts that are completed to Tennis Australia club standards – meaning they provide maximum safety and are able to withstand the damp conditions often faced by tennis players in Glen Innes, due to the self-draining qualities of the new surfaces,” he said.

“This project is firmly on my radar and I will keep pushing the case for the funding until the cheque is in the hands of the Glen Innes Tennis Club and the new surface on order and on its way.”